As a project manager, I have discovered that different developers want to bring their previous branching method with them when they join the team. Some developers are used to performing individual work, branching from and merging right back into the master branch. Others have worked on large teams where old branches were never cleaned up, leaving thousands of stale branches along the way. This can really create some otherwise avoidable issues. Fortunately, Bitbucket makes branching, comparing file changes, merging, and cleanup an easy task.

It’s important to involve the whole team, get feedback, decide on the best branching method moving forward, and work on getting wall-to-wall buy-in. Create a branching workflow diagram, explain it to your team, and, as you are getting started, require merge approvals. Require approval. It will keep new users and old from merging when they shouldn't and where they shouldn't, ultimately making for a happier team. 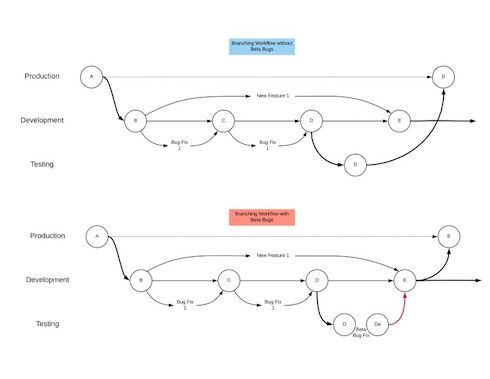 what if you need to apply a critical bug fix to the production branch?

do you re-do the whole process?

We have multiple release branches in use by different users.  bug fixes in some must merge up to other branches.  Our release branches seem to correspond to your production branch.  Each individual contributor creates their own development branch which is then merged to the production version branch after a pull request is approved.  Then those changes are merged up to other branches till it reaches the master branch.  This approach has its strengths and flaws.

@timhoustontx Critical fixes are pretty rare in my experience with this team. We alpha test, then expand our in-house beta, and finally roll a beta out to a team within our customer base before moving a build to production.

It isn't in our workflow, but I believe in a case where a critical bug fix is needed we simply branch from production, make the fix & merge back to production, and ship it. Then we incorporate the bug fix into the ongoing development branch and continue the sprint.

Another scenario we find ourselves is that the critical bug fix has already been completed in development. So we cherry-pick the commits from development onto the production branch.

Has anyone used #bitbucket-cloud for Development with Salesforce?

The critical fix is "Aa" and is merged to production immediately after testing, without requiring anything from the development branch. "D" is merged into production as part of the regular release cycle sometime after the critical patch is already in production.

@Vernee Green-Myers you should probably ask your question at https://community.atlassian.com/t5/Bitbucket-questions/qa-p/bitbucket-questions since it's specific to Bitbucket, but not this branching article.

This seems to be the GitFlow (or HgFlow) model, exactly. as @ralvy said. It's the git-flow.
There is a good reference on atlassian tutorials:  https://www.atlassian.com/git/tutorials/comparing-workflows

I applied it using pull requests on this example:  https://github.com/ericksprengel/git-flow-test/network

You can also check the original git flow post: https://nvie.com/posts/a-successful-git-branching-model/

We have locked the master branch down so you can't manually commit to it which is working fantastically for us.  A real pain in the arse for me but I got used to it quick enough.

If you need to do a hot fix you do it in a hot fix branch then create a PR and click merge to push to master.  The system messages everyone that a PR was created (via slack) so even if you don't tag people to review it they get notified anyway and can check out the hot fix.

I love this idea.  I'm going to incorporate this process.