Why do bitbucket branch list show failing build for a bamboo build that ran on a different branch?

- I have a plan that does a series of actions

- the plan is linked to a repository

- the default branch is set to master

- now when i run the plan, it uses the default branch which is master 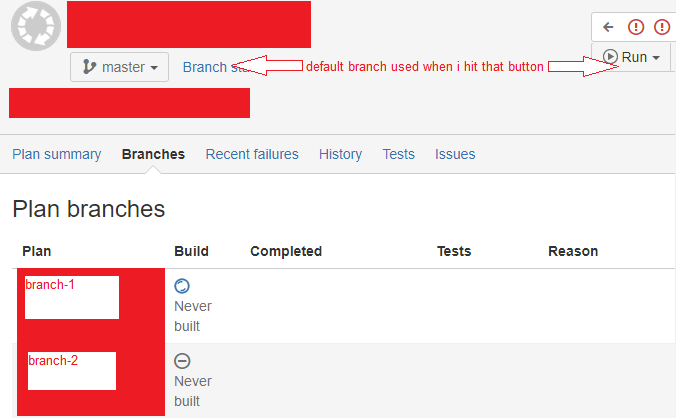 - I have a repo linked to that build plan above

This view shows me the failing and passing builds linked to this repo. Naturally I would see that a build has either passed or failed for master which has just finished running.

What I don't understand is all the "plan branches" i have on the bamboo plan also shows the same result.

I'm under the impression that bitbucket branches would only pick up builds that ran on the same branch.

I didnt show the failing builds popup to save this post from clutter but it does show the same build.

I'm expecting the branches list to show only build results that ran for a corresponding branch so that would be:

What's wrong with my setup?

First of all, I really want to thank you for the very detailed issue description. That is really,  helpful when we need to find out what is causing a problem.

There is nothing wrong with your setup. The problem is that Bamboo has more build status than the Bitbucket server and the status never built or not built are mapped to failed. That does not seem correct and because of that the following bug was open:

Please let me know if that explains what you see and if you have anything to add.

That makes sense, thanks!

Just wanted to confirm though, on the linked bug, the use case was 'on build interrupt'. For the case above however, the build wasn't interrupted. It hasn't even triggered. Would the fix cater for that case too?

Yes, it should fix every possible scenario that leads to an unbuilt status. That status means that the build was triggered (manually or not) but it didn't even start a job when it was interrupted. It was in the phase of updating repository caches when something blocked it to move forward.

The steps to reproduce added to that bug are one of the many ways to cause that build status.

Let me know if that answers your question. =]