I am trying to setup a bamboo plan for a maven project which then will create a docker image. Tried to even add maven task but still seems to not generate the target jar.

This is causing my docker build to fail.

Based on the build log (HND-HNDUS-JOB1-8) you have provided, you are downloading some source code from ssh://git@bitbucket.polakams.com:7999/hnd/spring-cloud-hnd-services.git .

Once you have the Maven 3.x task, you will be able to define what Maven should do in the same way as you would when running a Maven command from Terminal / Command Prompt. By default, the Maven 3.x task will execute "clean test" as a Goal, however, you should be replacing that with "clean package" or some other instruction defined in your pom.xml file, so the JAR file can be generated. 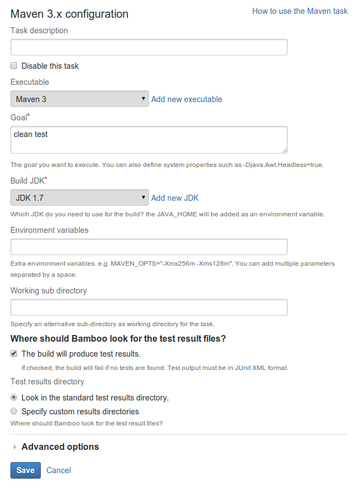 It is important to notice that Maven 3.x task requires two dependencies: