Can Automation set the Team field when an issue is assigned? Using Advanced Roadmaps we have set up a Shared Team with 2 people in it. I would like to set the Team field in an issue when one of these people is assigned to an issue.

Otherwise it becomes a manual task to update the Team field which seems redundant as we already know what team they are in.

Automation would need to look up if this person is in a Team and then set the Team field.

Assumes that a person can only be assigned to 1 team.

I'm afraid that this isn't possible at the moment. While it might be possible to set the Team field via Automation, there isn't any means for looking up if that person is in a Team at this time.

This can definitely be solved with Automation for Jira (if you have?)

User condition (where you add all the team members)

Note: you need to know your teams number 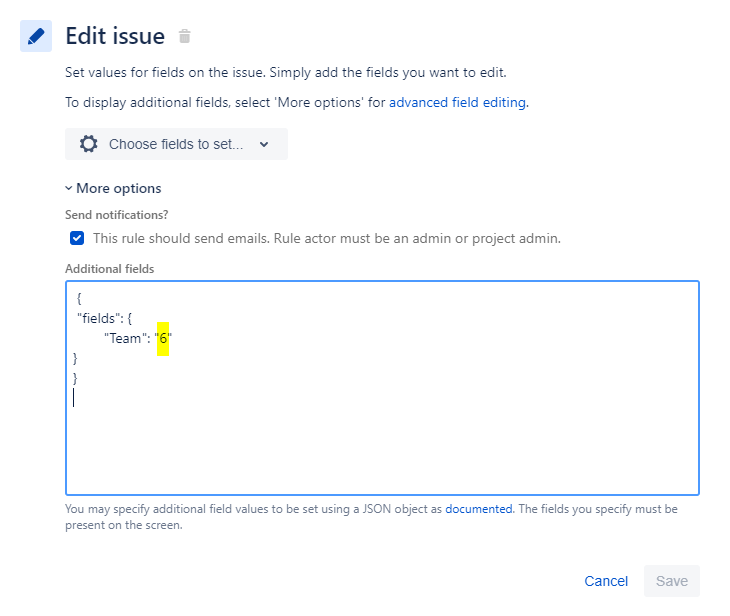 thanks for the feedback. I can update the Team value. That's all good.

What I want to do is lookup the Team value of the person who has been assigned to an issue and then assign that value to the Team field. This avoids users having to update both the Assignee and Team fields as we already know what Team a person is assigned to (assuming a person can only be assigned to 1 team).

As per Simeon's response I don't think this is currently possible.

I will look to a process change to set the Team value when the issues are first created.

I just wanted to provide some context around the absence of the direct linking between assignee and team. At one stage (back when Advanced Roadmaps was originally being developed as Portfolio for Jira 3.0 on Server) we were considering having tighter coupling between fields.... So for example you'd only be able to assign a sprint from the issue source associated to the assigned team, etc.

However we decided not to implement this as there was no way of enforcing this from the issue screens. So whilst we could prevent this within the plan interface (or provide automatic setting features) we wouldn't have the same ability within the issue screen.

One approach we have considered is both adding warnings (i.e. "hey you've assigned this issue to an assignee who isn't a member of the assigned team") and the ability to request smart "fixes" (i.e. "I'll assign the team that this assignee belongs to").

Of course there are always edge cases ... for example, there is nothing that stops an assignee being a member of more than one team (both within the tool, and in reality) so then you have to decide which team to assign.

We are keen to understand how customers want to get the most out of teams though and whether or not you'd like to have the option of this tighter association between team and assignee (as well as team and issue source).

One thing I'm particularly interested in at the moment is how you might be using teams in relation to issue sources? For example could a team be associated by multiple issue sources and would you also want to see that association reflected directly on that issue source - i.e would you want to see the team displayed and configured on the boards themselves and not just within plans?)

Totally get that you do not want to have tight coupling which is why I was going down the automation path.

Our organisation has 4 teams that will be working on BAU changes / minor enhancements. We want to use the Dependency Report to show any blockers between teams.

We are still in the process of setting up the plan but the approach I am taking is to have 1 team associated with 1 issue source ie. 1 board for each team where the board JQL is Team = {teamid}.

I am also displaying the Team on the Jira board. The users are familiar with assigning users so I was hoping to look up the Team they are assigned to and automatically assign the Team. Of course this assumes that a person can only be assigned to 1 team.

I need to investigate and test the feedback from Curt Holley (comment above) but currently suspect there is no way to do this. If that is the case then I will look at a process change to set the Team field when the issue is created.

I'm from the Automation team so I can tell you that we don't have native support for it and I'm not familiar with the make up of their field but if it is in a fairly normal format then such an approach as suggested will work.

Best way to figure it out is to have a look at the REST view of an issue with the field set on it, eg XXXXX.atlassian.net/rest/api/2/issue/BIO-13?expand=names

You then can replicate that in the advanced section of the edit action. For example, if it is of the form:

then in your edit action you'd do:

It can take a bit of fiddling to find the right format. It might be a 6 without the quotes or it could be in the format as suggested by Curt.

If you get stuck, post here and we can help. We just can't help you find mappings or anything, but we might be able to set the field if you can figure out the value :)

Thanks for providing that additional info @Mark_Stewart - it's really valuable!

I am also displaying the Team on the Jira board

...do you mean you've given the board a name that directly maps to the team name?

One of the things I'm exploring is whether or not there would be value in setting team association directly in the board configuration and having the team name automatically displayed and having the board filter be updated to only include issues assigned to the team (this would obviously be optional). If such a capability was available would that be something you'd use?

sorry I wasn't very clear. I am displaying the Team field on the issue as per the screen shot below.

I think I am basically doing what you have outlined. Board is named after the team and the board filter is where Team = {Team Id}.

If you were to support this with best practice guides or tutorials on how to use Teams then that would be very helpful. At the moment I am experimenting to see how Teams works and how best to set it up for my organisation. 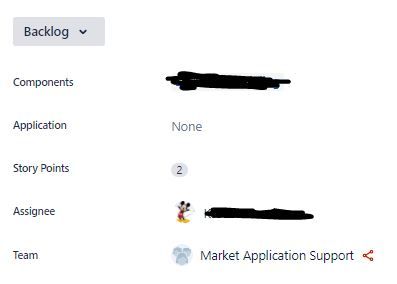 It would also be good to add Team to the selectable Statistic Types for the reports / widgets such as the Pie Chart widget.

@Mark_Stewart I don't think we have any specific best practice articles for this, but I personally recommend what you're doing (and is the approach I take) which is to create a board for each team (with a custom JQL filter for issues assigned to the team).

I then use those boards as issue sources in my plan so that I can group by team and access the sprints (and do capacity planning) within my plan.