What I am trying to get to work is linking a newly cloned issue to an Epic Issue that is the parent of the sub-task that we are cloning information from to create the new Issue.

I have found several examples on the web but have not seemed to be able to get any to work.   I double checked that the issue type that I am creating has the "Epic Link" field on its create screen and it does.   I have managed to get the epic link key but can not set it on the new issue.

So we have a transition that when fired does the following:

I finally deleted and rewrote the script in step 7 without actually setting the value on the new issue and it shows no errors.   But any time I had option of setting the epic link it would just fail.  So I am getting my subtasks but the new issue is not being linked under the epic it should.

Here is relevant part of my script:

def epicLinkKey = issue.getParentObject().getCustomFieldValue(epicLinkField) // gets value of Parent of original issue that has epic link

// If we find the epic key then we need to update newissue with this epic link
if (epicLinkKey != null) {
log.debug "newissue = " + newissue.key + " epicLinkKey = " + epicLinkKey
}

So in the step where there is an epic I just need to update ABC-96 with the Epic Link to ABC-40 and then just keep moving into the script to create the needed sub-tasks.

In the clone post-function, the additional issue actions will have 2 variables available in the context: sourceIssue (the issue that triggered the workflow) and issue (the cloned issue created by the post function).

Thanks for pointing this out to me.   I am still learning the scripting with JIRA and learn something new every day.   I was able to do what I needed based off your answer.

I tried with your above solution to create a clone issue in post function and should be in Issue in Epic link. But only clone issue is working and not the linking to parent (issue in Epic). 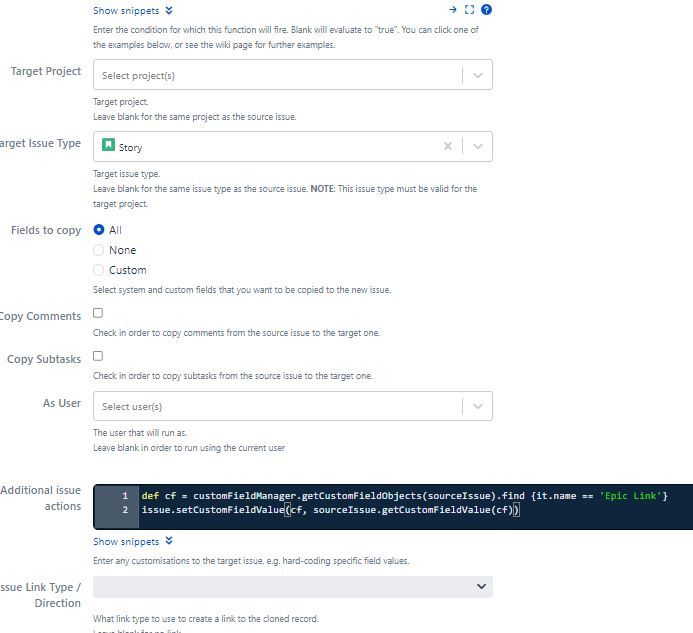 You can try adding some debug messages to the "additional issue actions" and try to figure out why this wasn't working for you.

Try with the code below and then look at the resulting logs:

Note: This was initially posted before scriptunner started deprecating the built-in customFieldManager. The code before will should the current preferred method.

Worked with below script: