Throwback Thursday: Any good stories of past new year's resolutions?

So, if you want to what the talk of the town is in Iceland (take the nation's pulse), then you go to the public swimming pools and sit down in the hot tubs. The old folks show up way early but the younger folk at the end of the day. Or anytime on Saturdays. 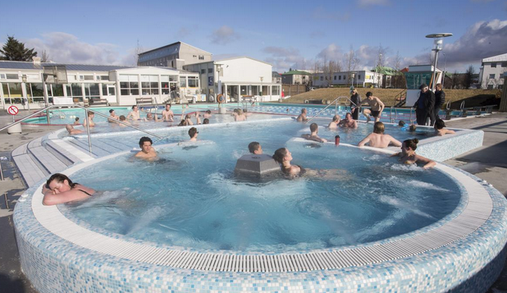 Few years ago, I went to the pool. Swam some laps and then settled down in the hot tub to relax afterwards. Two very bulky guys were sitting there. They obviously lived at the gym, no question about that. After a few minutes, one of the guys said to the other something like: "man! So hard to do my exercise routine with all these new people at the gym. I have to wait so long to get on the machines." The other one replied: "Just give it a week or two. Then all these folks with their new year's resolutions will disappear and we will have the gym to ourselves."  :)

I hope that I am not offending any gym lovers. If so, then I apologize. Did not mean to offend.

This story is just applicable to other areas and I have been very guilty of making lofty new year's resolutions...  :)

I am not a fan of January 1 resolutions. There is a lot of pressure on the "New Year, New Me" bandwagon and I figure if I was going to make a change, I would have honestly put in the effort earlier in the year and not waited until then to do so. I have an aunt who makes birthday calls every year and plays a "game" where she asks, "What was something you accomplished in the past year that you are proud of?", "Did you find that your goal from last year remained relevant and was it achieved?", "What else did you celebrate achieving in the past year?" and What is a goal you have for the next year?" so I tend to prep for my birthday in July by thinking about goals and and being retrospective as well as introspective. For some reason it feels different than doing so on January 1.

I agree with @Malka Jackson [Isos Technology]! I am not a big fan of New Year's resolutions and for one reason; they have never worked for me! Another reason is New Year's resolutions are like Valentine's Day. Why do you need a day to love your spouse or partner? Why don't you love them everyday? Same concept here; why do I need to set resolutions only at the beginning of the year? I should have them throughout the year so the pressure is spread throughout the year instead of being piled on me at the beginning of the year. I also tend to focus on what I am proud of from the past year and how I can one up those things.

@Summer_Hogan .. I agree ...but I do like to set resolutions just as a checkpoint 😀..At the end of the year you need to be  truly committed to achieving your resolutions ( which is the hard part  )

I'm not offended at all from your story, since I believe that I'm one of these guys that the gym guys were talking about! :)

good funny story, I do not take any resolutions for new year as they won't work any time.

But good to have resolutions, atleast we will keep that for some days.