In order to get around Jira's inability (refusal?) to link subtasks to epics out of the box, I've successfully come up with an automation for when new subtasks are created under an issue belonging to an epic.  The automation adds a new type of issue link of "has epic ancestor of" between the sub-task and the parent issue's epic.  (Screenshots below.) 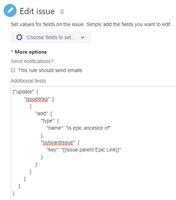 However, I'm trying to come up with the automation that will create or update this issue link if the existing sub-task's parent issue is added to an epic for the first time, or added to a different epic.

My instinct for the trigger would be to use "Field value changed" and have the field to monitor for changes be the Epic Link, but Epic Link doesn't appear as an option:

I can type in Epic Link and save the rule without receiving an error message, but the trigger doesn't appear to get set off.

Any suggestions on how to use a field change of epic link as a trigger, or another way to go about this?

Never mind - I see that this is a bug that has been fixed in a later version of Jira (I'm on 8.2.4).  Leaving this question here in case anyone finds the automation for adding an issue link between a subtask and its parent issue's epic useful.

@Lucinda Stroud  You may use combination of Trigger and Condition: