We have a standard set of tasks and sub-tasks that are created whenever a new sprint is created.  I would like to automate this, it appears that it is straightforward.  I must be missing something obvious.

1. When Sprint is created

When trying to publish the rule.  I receive the following error.  I've tried adding a branch with the "issues in the sprint" value selected, but this does not work.

Also, if I remove the create sub-task then the rule works fine.

I have added a screenshot.

Any Ideas where I am going wrong?

Just quickly, here is what you want: 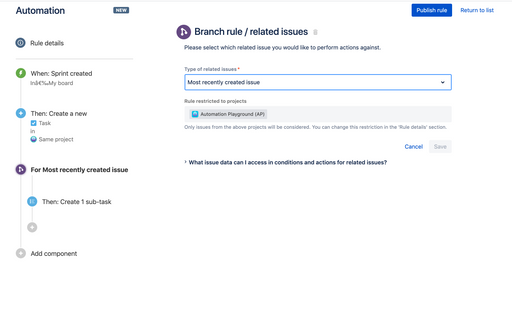 I’ll also explain in case that’s helpful to others or to yourself in the future.

It helps to understand what is happening as a chain of components execute in an Automation. As each step executes, it writes any relevant details into what we call the “context object”. This is the object from which smart values are pulled.

Most automations trigger on some manipulation of an issue, so it is often the case that {{issue}} exists within this context object. Lots of actions implicitly read this {{issue}} value to understand what issue to operate on.

In your case, because the automation isn’t triggered on an issue, there is no {{issue}} in context. Because of this, the Create Sub-task step doesn’t know where to create the sub-task.

You may think that the Create Issue action should push a value into {{issue}}, but it doesn’t. Instead, it pushes a value into {{createdIssue}}. My screenshot above works around this by using a branch component on `most recently created issue`. Branches maintain their own context and this specific one effectively takes the value on {{createdIssue}} and treats it as the {{issue}} for all of it components.

Wes, all of that makes sense.  Thank you for your quick reply.  I applied the suggested changes and it work perfectly.

Great product, by the way.

Matt, Thanks for the tip!