I'm attempting to use the feature called out in the Bitbucket Server 6.6 release notes to suggest changes directly in pull requests, via the suggestion block syntax.

Given the following in a pull request (as a trivial example):

however, I'm not finding any information on how to make it clear that this suggestion should be applied to both of the source lines.

I've used a similar feature in GitLab pull requests, and was able to provide an argument to indicate (say I clicked on the line containing the second line in the example given) - I don't recall the exact syntax, but something like `suggestion-2+1`. Is there any syntax like this that will allow multi-line snippets of code to be changed directly in a pull request via this feature?

Hi @Kajsa Anderson the multiline suggestions are not yet supported by Bitbucket. What you can do is to try to add suggestions to both lines individually.

We do have a feature request for adding support for multiline suggestions: https://jira.atlassian.com/browse/BSERV-12219

You can vote on that ticket and add yourself as a watcher.

So in the example I gave, would that require commenting on the first line with an empty suggestion?

Yes, the first suggestion would update the first line and an empty suggestion like this one below would remove the second line:

Here is the example 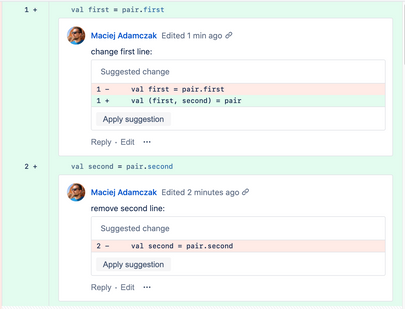 This is highly annoying for code suggestions that are more than 2-3 lines long.

Most of the time I have to use multi line suggestions. so this is unusable for me. But glad that it is in progress and will be available soon.