We have deployment plans (NOT BUILD PLANS!) that a user may want to cancel for whatever reason.  When the user presses the cancel button, there doesn't appear any way to capture that fact during the Deployment process.  We'd like to then do something after a user cancels a deployment.  For background, we have a custom-made deployment mechanism that handles deployments asynchronously.  Namely:

The problem is that if the end user clicks, in Bamboo, "cancel", we'd like to then send a "cancel deployment" command to the deployment mechanism (simple REST call does the trick).  However, I can't seem to find anything like "final" tasks in the Deployment stack, or any variables that suggest that the deployment was manually cancelled.  Is there a way to capture that some how?  I can't figure out what Bamboo does to the active running tasks on the Deployment side (issue a kill -N signal that I could trap in a script?) when you cancel an active deployment.

Note - this is for DEPLOYMENT PLANS, not BUILD PLANS.

In a deployment project you should see a line that says Final Tasks and you can drag items under the Final Task to make sure they run even if the other tasks failed: 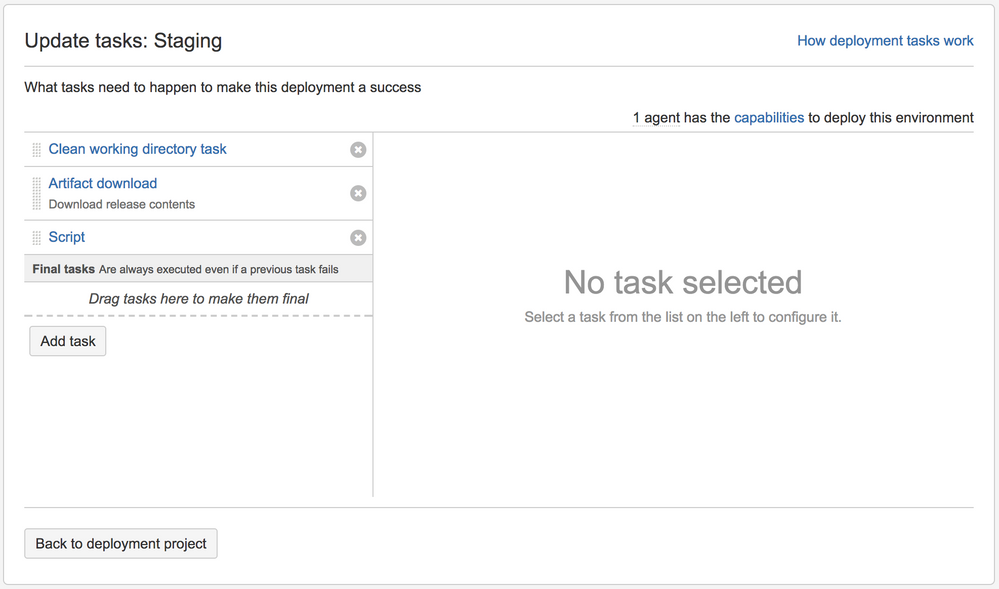 In regards to who completed the plan, if you view the full deployment log, you can search for "Request to Stop."

OK, but how would I use that programmatically?  I can always manually observe a log file to see if "Request to Stop" happened.  Are you saying that I should create some kind of parser that runs that does a grep on the output log (wherever it's stored locally) for a given deployment, and then execute on that?  I can't find a "parse deployment log file" task.

Hrm.  It appears that I can (probably fragile-ly) construct a path to grep in a log from:

Is that what's expected?  I didn't see any values that pointed to the existing build log (like a $bamboo_build_log) set in any of the deployment log.