I'm barely getting back to the groove of things after returning from Summit. So many things happen during Summit and I'd like to share one funny story. My friend and I were leaving the Pledge 1% room after making a sweet package for students in the Girls Who Code organization. We had to take a bathroom break before heading back to the expo floor. So we headed towards the restrooms and I saw a sign that said "Gender Neutral Bathrooms" (or something like that). In my mind I thought "oh that's cool," so I pointed to the restroom door and my friend followed.

We walked in and one of the conference staff was in there cleaning. We barged in like nothing, his eyes opened very wide and told us we were in the wrong bathroom. We then saw urinals, his reaction and rushed out.

So here's my question, what's the proper edict when using gender neutral bathrooms? Is there a secret code or a code of conduct? Share your thoughts, unknowns and even suggestions. I'm sure there's people that are new to this and we want to make sure we are doing the right thing.

First of all, to clear up the common confusion surrounding gender identity vs. biological sex:

"Gender is complex and multi-faceted. In North American culture several distinct facets of ourselves get lumped together when we talk about “gender”:

The cultural expectation is that one’s biological sex, gender identity, and gender expression will align in stereotypical ways: that someone who is male will identify as a boy/man and have a masculine gender expression, for example. This expectation does not serve our diverse world and the myriad experiences of self that exist."

Regarding your experience in a "gender neutral bathroom" (the reason for the quotes will become apparent soon enough), either the bathroom was improperly identified (whether it be by the facility or yourself) or the staff member was not properly educated on what that means. It definitely sounds like the staff member assumed your gender the moment that you walked into the bathroom AND made you uncomfortable which are both big nopes.

By definition, a gender neutral bathroom should be a safe place for anyone that feels uncomfortable using the stereotypical bathrooms that are separated by biological sex. For anyone who doesn't understand why someone might be uncomfortable in this situation, I encourage you to place yourself in their shoes or to discuss it with someone who does feel this way. To me it sounds like the staff member judged that you were too feminine or masculine for this particular restroom, which according to all literature, is the opposite of what this space is designed for.

"There is no rule that a person must look a certain way to use a certain restroom. This kind of “gender policing” is harmful to everyone, whether a transgender person, a butch woman, an effeminate man or anyone dressed or groomed in a way that doesn’t conform to someone else’s gender standards."

TLDR: I'd say you probably didn't do anything wrong.

Hey, thank you for breaking this down for me! I totally needed this. I do think that Atlassian had great intentions with providing a comfortable setting for attendees. I do believe that the staff member was part of the hotel/conference staff and not from Atlassian. Kudos to Atlassian for showing inclusivity and going the extra mile.

I think this is a great example and take away for event planners. As a person who regularly organizes events and meetups at different locations, I now see the importance of sharing our organizations values with the location owners so that they too can set the standard. It's inevitable that attendees will bump into staff, so making sure they receive the same treatment across the board is vital.

My partner and I were happy to noticed the gender neutral bathrooms, too.  I also picked up one of the gender pronoun buttons that made an appearance by the G'Day board.  I can see how some people might not notice how the restrooms were labeled.  No blinking lights or anything.  :  )

Our local LGBT+ film festivals convert the host facilities into gender neutral restrooms so I am familiar.

I did see the buttons! That was a nice touch done by the Atlassian team. The last conference I went to, they also had pronoun stickers that you can add to your name tag. Prior to that, I never seen that done at a conference.

Hi, probably , it's too late but it's just a tibute to new "trends" and you know what I mean. I'm working here and we did a lot of orders dedicated to similar signs placement. How to comment that...

The button is the best solution I've seen so far.  I plan on reusing it at other conferences.

Uuuuuu that's a good idea! That may spark a change at other conferences.

When I worked for a medical organization, I wrote about a lot of IT issues, including explaining called SOGI (pronounced SO-jee) codes (something physicians use in electronic medical records).

O=Orientation (which sex you are sexually attracted to)

G=Gender expression (which sex you present to the outside world)

I=Identity (which sex you identify with).

I'm a cis-gendered heterosexual female, who presents as a woman and identifies as a woman.

This is obviously too simplistic--and doesn't account for the many variations that don't fit neatly into these categories. There are further codes to indicate whether say, you were born male but take female hormones, whether you have had top and/or bottom surgery, etc.

It's all complex (and no one's business, really, except for you, your doctor and your partner).

On another note, I have an old friend who used to be a professional women's basketball player. She is extremely tall and muscular and has short hair. Several women have tried to kick her out of restrooms, assuming she is transgender. She has subsequently been accosted by security guards and had the police called on her. Jen is the sweetest, most gentle person I know and it breaks my heart. She finally left the US to live in Mexico because of the harassment she gets here in the states.

I have another friend (my age--nearing 60) that I have known since we were both pregnant in our 20s. Lori is an actor and acting teacher with a deep bass voice. She has been attacked by both men and women--and accosted in bathrooms for the same misguided reasons. Born a woman, still a woman, married to Tony for 30+ years.

I know women who are fearful of sharing a bathroom with someone who is transgender (which they probably have done repeatedly without ever knowing).

Honestly, I don't care who is in the bathroom. I just don't want anyone to come between me and being able to pee when I need to. My general rule is "mind your own damned business."

Karen I am with you! Just move when I'm sprinting to the 🚽

This is a great topic! I have a colleague that was in the process of gender reassignment surgery and because he was not comfortable going in either of the gender specific washrooms he only could use the disabled single-use washroom. He said that washroom was so busy with individuals wanting their privacy from the stalls in the other washrooms, that some days he didn't get to go to the washroom at all. It was heartbreaking.

A friend tweeted this from a gender neutral washroom which I thought was a fun way of saying all are welcome in this washroom, instead of the gender neutral label on the door. This makes it obvious that all are welcome in this washroom. What are your thoughts, do you think this signage at a restaurant would be offensive to some or would it be an easy way to move away from the traditional washroom symbol of the figures in pants and a skirt. 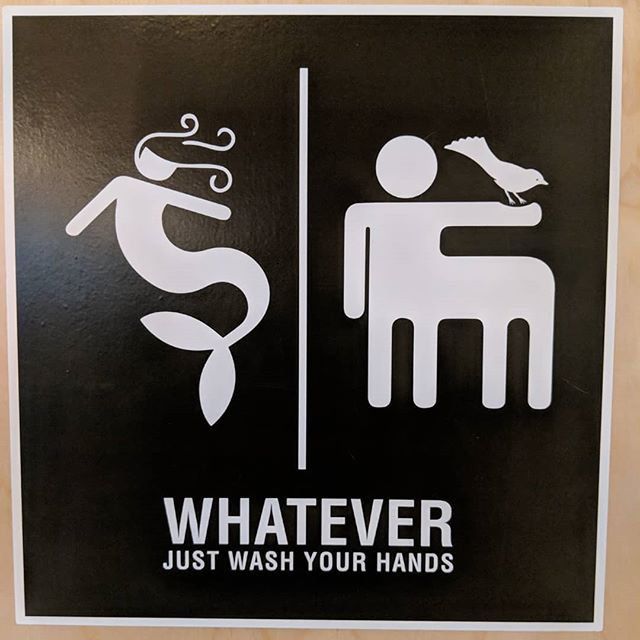 I have also seen the sign below, which I would find to be more offensive than the one above, even though I am sure the intent of the sign below was to say the same, that all are welcome. What are your thoughts? 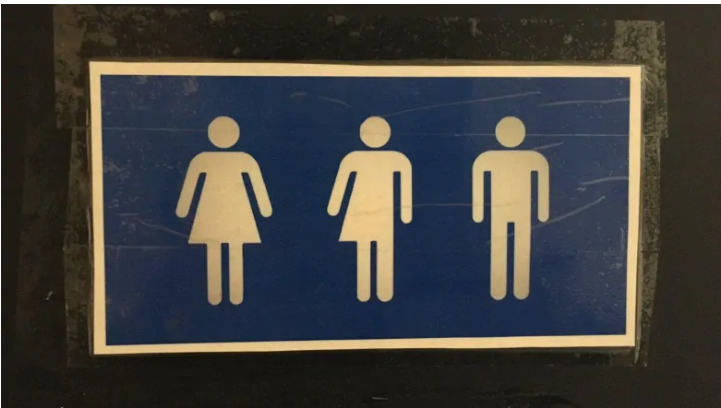 Ha! I love these pics, thanks for sharing!! 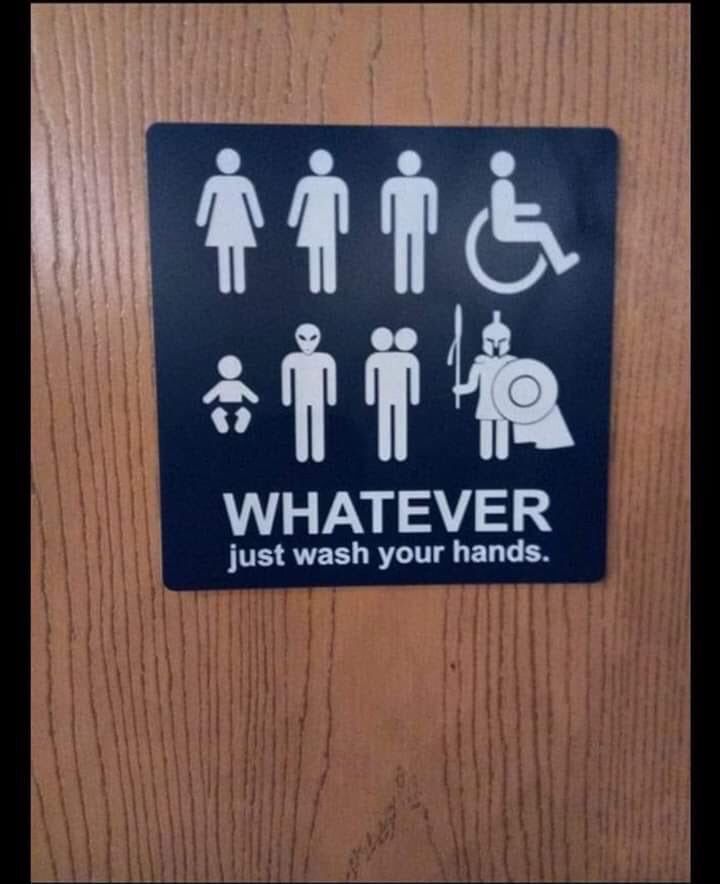