Google’s new approach, which we saw the first signs of last year in Android Pie, is to create emoji designs that could conceivably be either male or female. The approach varies between the different characters. Some have genderless mid-length hair, while the dracula emoji has had its clothes changed to an androginous chain rather than a bow-tie (male) or choker (female). Meanwhile, the genderless merperson has its arms crossed in front of its bare chest to obscure it.

There’s no singular way of getting it right,” admits Google designer Jennifer Daniel to Fast Company. “Gender is complicated. It is an impossible task to communicate gender in a single image. It’s a construct. It lives dynamically on a spectrum. I personally don’t believe there is one visual design solution at all, but I do believe to avoid it is the wrong approach here. We can’t avoid race, gender, any other number of things in culture and class. You have to stare it in the face in order to understand it. That’s what we’re trying to do–to [find] the signifiers that make something feel either male or female, or both male and female.” 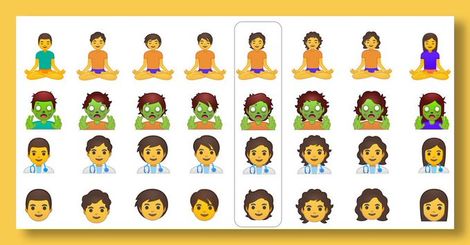 For now, the 53 new emoji are exclusively a Google project, meaning that if you send them to a non-Google smartphone they’ll still be assigned a gender. However, Daniel thinks that other companies will eventually adopt a similar approach. In the long-term, Daniel wants all emoji to be more universal. That doesn’t mean the old gendered emoji will disappear (they could still be accessible via a contextual menu) but the gender inclusive emoji could become the new default on the emoji keyboard.