Rule to convert completed checklist items, as they occur, without linking?

Hello. I am attempting to create what I thought would be a simple rule to convert completed checklist items into cards, as they are checked. I do NOT want them linked since I have another rule that runs off attachments that runs incorrectly if I have linked cards.

The below is the rule I have at the moment, but it converts ALL checked items EVERY time a new item is checked, meaning with 3 checklist items I will have 6 converted cards. I just want one card per one completed checklist item, and not to have them linked.

edit: I've been assuming you do want a link as the checklist item, just not a linked item (which will add an attachment)

Not sure of your set up, but is the problem of a linked item that it has an attachment, or that it creates an attachment (as that's a trigger)? If its the former, the answer is easy, convert the item then remove the link. If its the latter, then its requires some workarounds.

In either case, you are using the wrong Convert command. Here's a short version of the former solution. Should be easy enough to play around with: 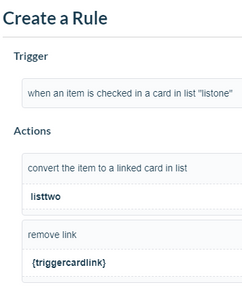 edit2: instead of removing the link specifically, you can also just use the simpler "unlink the cards". I've gotten used to playing with variables so that slipped in. Works either way though.

One way to get around a "when you add an attachment.." trigger that doesn't have drawbacks, is to simply edit the attachment rule to be only for cards not in a certain list. We'll call it list "temporary". In which case, you convert in to list "temporary", remove the link, then move it to its actual final position.