Removing Board Members and Historic?

I am an administrator member of a board, which contains 10 people, but only me as a Gold user. I need to leave this table, but I have already worked on several cards in this table, making moves, creating rules in the butler, creating custom fields, etc. I would like to know if my departure from this table will eliminate the history made by me inside the cards. The chart will follow the settings implemented by me after I left it.

@Ubirajara Mateus I don't think your Butler rules will survive your departure but all your other work will.

If you want your Butler rules and calendar commands etc to be available to the other members after you've left, you would need to screenshot the processes and send them to another member so that they could replicate them on one of their accounts (so that they would be set up exactly as you already have them).

However, it should be noted that free accounts are only allowed one of each type of command. So they would need to work out between them, who is using which one. E.g. if you have 2 'standard rules, 1 person would need to have 1 replicated and another would have to replicate the second one. However, if you have 'due date' commands (called schedule commands), free users don't have this option: 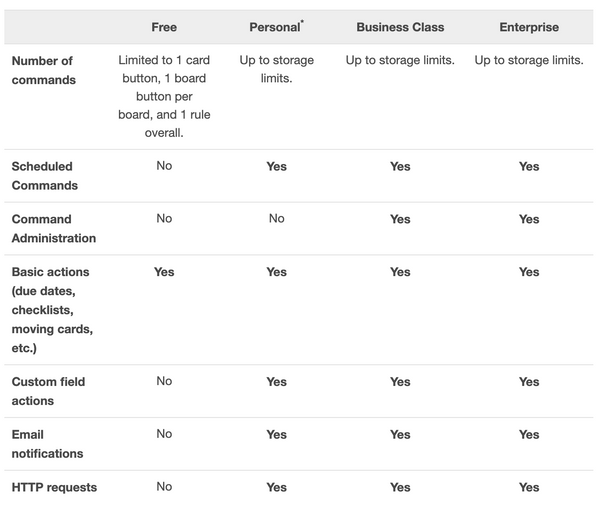 As a Gold member, you have more Butler quota than free accounts:

So there is also the chance that they would run out of Butler, depending on how often the commands are run. More information on quotas and allowance can be found here: https://help.trello.com/article/1181-butler-features-and-quotas

So, I would suggest that you talk within the board and see who wants to take over which rules, so that they continue after you have left. I did this recently in my Business Class team, I sent a screenshot of my rules to another person, when they had set theirs up, I unchecked the 'enabled' button so that their rules would run, we checked that they were running, tweaked anything that needed to be, and now their rules are running and mine are redundant.

Thanks for the answer about the rules. But what about the comments I made on the cards ... activities I posted ... Will these disappear from the cards when I leave the board?

No, comments and activity history will still be on the board after you leave!