How can I get butler automations to run on cards that have completed due dates?

All I want is to be able to create cards that show progress in some way (like a checklist that has items that can be marked off, or a due date that can be marked as completed- preferably both) that also automatically resets every day/week/month.

So my next idea was to create a butler automation that will mark my due dates as incomplete an hour before they are due (so the above action would run.) That would also work, but once again it will only run this automation if the due date hasn't been marked as completed. The command literally says "1 hours before a card in list "the daily" is due, mark the due date as incomplete" but when I did a test run it says it ran on the card that was incomplete but didn't say anything about running on the card that was marked complete. (Both had the same due date and time.) What's the point of marking an incomplete due date as incomplete?! To further test things, I did the command in the opposite way, telling it to mark it as completed. And that worked on both of my test cards. It just won't do it the opposite way around.

If anyone has a better way of setting this whole thing up, please let me know. I'm happy to explore other ways of doing this too.

@Sarah Watkins having a due date marked as complete shouldn't impact the ability to run automations on the card, you probably just need to tweak the rule. 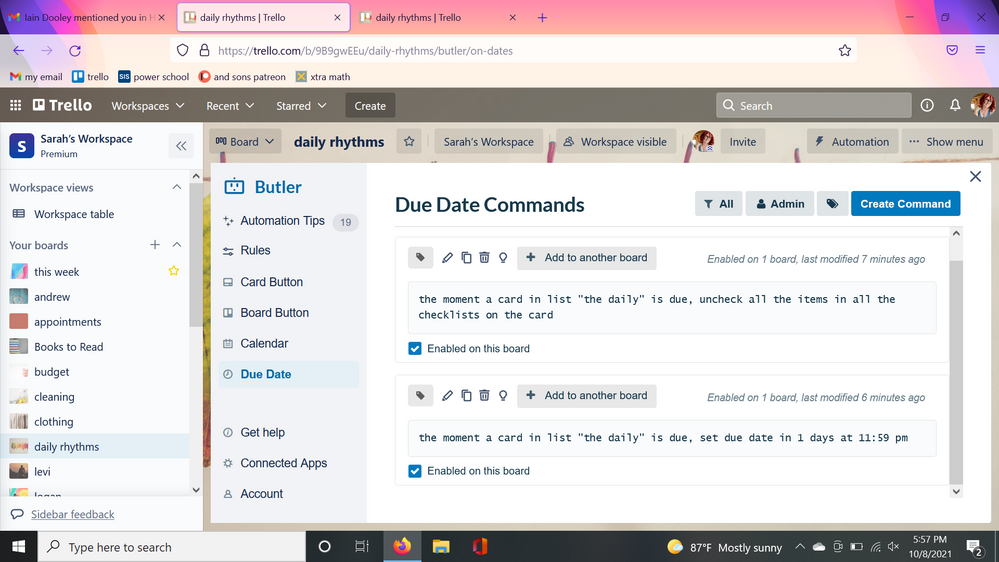 @Iain Dooley  thank you SO much for replying on here. I'm working with the help center for trello, but so far no solution. I added a screenshot of the commands I have right now. I know these two can be combined, but I had separated them in the hopes that it would work correctly. But no. I have tried so many different combinations and commands, and they all consistently work if the due date is not checked and don't work if it is. The person from trello help suggested I do a command that involves "with a complete due date" in the command, which I really thought should work, but that didn't even work. I would love to hear any advice you have. Thank you! Sarah

@Sarah Watkins yep, you're right, it doesn't work. This seems like a bug to me because the fact that there is an explicit filter for taking action on a card with a complete due date, does certainly suggest that you should be able to do it.

This is something we could do relatively easily with our BenkoBot platform:

BenkoBot is "low code" though, rather than "no code", but while you can't set it up yourself unless you're a coder, it does allow a coder to set these types of automations up for you inexpensively.

We can introduce you to our team of vetted developers if you'd like to get this sorted out if Trello aren't going to fix this.

Thanks so much for your answer. I finally got through to Trello and they said they will fix the bug. Hopefully soon. Thanks again for your help!