I’m not gonna lie, I talk a big game Monday through Thursday about my grand plans for the weekend. My working hours are filled with unicorn dreams of long bike rides by the river, catching up on that book I’ve been meaning to get around to, or busting out the family laundry like a boss.

By the time Friday rolls around though, put a fork in me… I’m done.  My couch sings her siren song and I watch my grand plans crumble in favor of a big warm hoodie and some stretchy pants. I make breakfast for my kids and flip on the tv. Cartoons for days, people.

Current favorites are Steven Universe, The Amazing World of Gumball, Adventure Time, Gravity Falls, and We Bare Bears. I’m sure my laundry pile will forgive me just this one morning…

However, Luna Petunia was on at our house this morning. I love some of the shows my kid watches (like Odd Squad) but Luna Petunia... 😒

@Monique vdB - Have you seen Nailed It yet? I feel like this would be a valuable contribution to the next US Atlassian Summit

Here is my youngest and his kitten zonked out while watching TV: 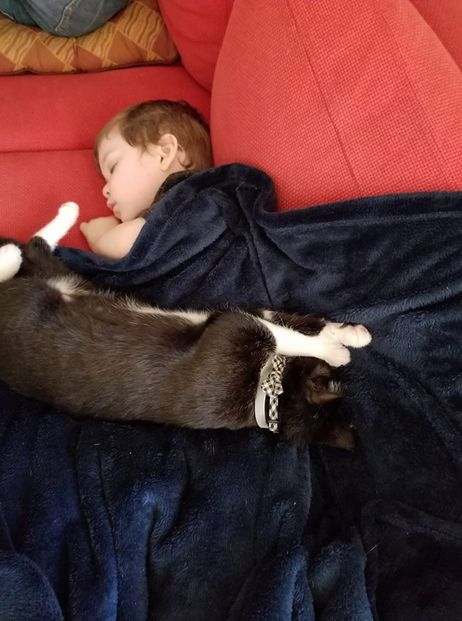 @Meg Holbrook we watched the Trump cake episode and laughed until we cried -- hilarious! I am a terrible, terrible cook, so I will participate in our Summit edition of Nailed It! for the sake of comedy.

Such a cozy photo, best buds!

Happy Monday! This Miscellaneous Monday brought back so many fond memories of waking up as a child to watch Saturday morning cartoons, my favourite was the Smurfs. I had everything smurf-related: smurf wall paper, smurf figurines and stuffed toys, smurf pyjamas and comforter etc.. so may of called me a smurf obsessed five year old.

These days my favourite Saturday morning routine is waking up early, drinking my morning coffee slowly, and making a bigger breakfast than through the weekdays. My husband and I then go to the Farmer's market and spend the day doing our favourite things - visiting family and friends and/or outdoor activities.

Hope you all enjoyed your weekend :)

@Jodi LeBlanc I used to love the Smurfs so much. But now I'm like WHERE ARE THE GIRL SMURFS THIS IS SEXIST and then I go around quoting Dogs and Smurfs at everyone. I'm fun at parties.

@Monique vdB love the article you shared - very eye opening! Can't believe I didn't realize that back in the day when I was smurf obsessed!

This line though, quoted from eternal truth:

Kids are little animal stalkers, fascinated by absolutely anything an animal does.

I remember having a similar conversation with my husband the other day about this show my youngest watches called Octonauts. He's obsessed with this show, and ALL the lead characters are male. Incidental female characters sprinkled throughout.

Drives me nuts, I can't help it. I am also fun at parties, apparently >_>

@Jodi LeBlanc, looooove the Farmer's Market! We're fortunate to have about 4 within a mile of us each Saturday and Sunday, as well as a once-monthly antique market.

@Meg Holbrook we went through an Octonauts phase here too. At least the engineer is female! But yes. Once you start noticing it, it's everywhere.

We can be fun at parties together. Let's have wine and rant about sexism in children's TV. Are you coming to Barcelona Summit?? :)

@Monique vdB, no Barcelona for me. It was difficult enough getting away to Summit when I live in the same state!

Oh wow @Meg Holbrook four Farmer's Markets within a mile, sounds like a dream! We have indoor markets on Wednesday and Saturday, and in summer outdoor markets on Sunday. Love the atmosphere and all the farm fresh local eggs, fruit, vegetables and artisan crafts :)

I'm less about western cartoons, and more about Japanese Anime and videogames.

As a kid, I'd wake up super early on Sundays (Saturdays were usually spent on sports) so I could get the office computer first instead of the library computer. The office computer was the one dad used for work and the library was the "for school use" piece of pie. The office computer also had two monitors... one for Runescape (back in it's prime) or World of Warcraft (Pre-Catalyst days) and the other for anime, usually Naruto or Inuyasha (don't judge, I was like 12).

Now, my Saturdays are spent playing League of Legends (Runescape died) or watching anime with my boyfriend and his four dogs. We just finished watching Pokemon and Cowboy Bebop.

I also cosplay, so I've been working on my outfits. I'm binge watching My Hero Academia so I can cosplay Sue: