It was the last race,

I recall a deep and massive feeling from the previous speed racer of Formula 1.
Lewis Hamilton and Max Verstappen came into the year's final race tied for the 2021 Formula 1 title with 369.5 points each. More emotion than that, impossible.
I watched all the races last year and have been doing it in 2022.
For me, Lewis Hamilton represents incredible ethic behavior and a clean way of doing his job. When I look at him and his stories, I see a respectful man who loves Airton Senna (and yes, I'm Brazilian), so competitive, elegant, and brave (as Charles Leclerc is - and my husband like him, he's so talented too). I genuinely want to learn more about Lewis's emotional balance because it's unbelievable.

So, come back to the final race, hahaha, I started that week with a positive mind for him, and the result: Hamilton, the Winner! However, Max, looking for his first world title, started from the pole position. And then happened the first touch between the two. Max tried to get back at the Brit and take the lead. Yet, he touched the opponent, who left the track but managed to return and take first.
The stewards understood that the incident on the first lap would not have to be investigated. It was decided that Lewis only left the track because Verstappen pushed him. On the final lap, Verstappen got Hamilton back. 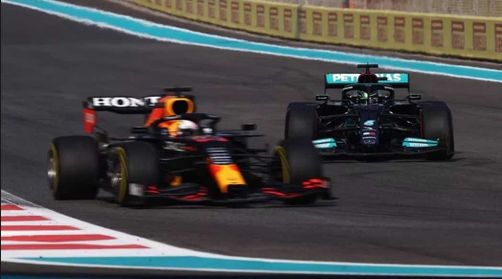 In the last corner, the Dutchman managed to overtake the Englishman, made history in Abu Dhabi, and won the unprecedented title. 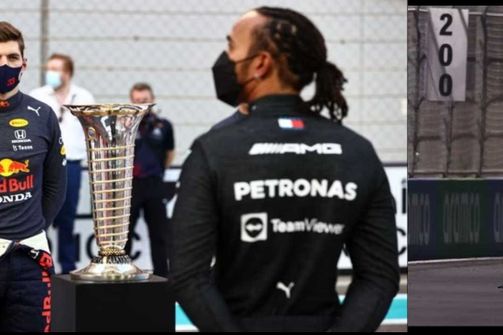 So I cried. Regardless of Lewis's position on each race, I'm still cheering him as a loyal fan.

For this reason, I'm curious to know if you have or had a passion for a sport or someone related and got your nerves racking in a final decision. 🤣

I wish you a fabulous week! ❤️

Every time my team is playing in the super bowl I have to cheer them on and am a little biased with the refs decisions.

Hi @Brant Schroeder; hahaha, awesome! I love the super bowl too! It's hard not to become biased! 😁😃

Exactly what I think too!  I can't sit down in the 4th quarter.

For sure! Thanks for coming @Marjorie

I do love the the F1 and am amazed at how level headed yet intense Lewis remains. While I enjoy many different sports (NFL, NCAA Football and Basketball, PGA) I am not the die hard fan that I was in the past. While I do not follow any one sport religiously I do engage in all the big engagements and rivalries.

Hi @Jack Brickey, this is fabulous and so balanced! I hope in the future not to be die-hard as I do for F1. In all the beginnings of races, I thought: "Alrighty, let's watch F1! It'll be a pleasant time. But on the 25th lap, I change into the most enthusiastic and competitive fan"! Quite unbelievable LOL, 😁😁😁😁.

This is my experience with almost every ASU Sun Devil football game! My nerves aren't just racked in the final decision, but the whole game and the whole season! Every year they go no better than 8-5 and it kills me because they have not been super successful in many, many years. Every year I buy my season tickets, go out and sit in the 100 degree weather to watch them and every year at about game 9 I say to myself "Well, maybe next year" but it never comes! UGH! So, while I don't watch F1 @Patrícia Fortunato Montenegro I can definitely relate, but I just keep saying "Go Devils!"

We're on the same page, LOL! You can relate because a football game is so exciting; I usually watch some games. I love it too! 😃🤩👏🏽🏈🏈🏈🤩

For me it is football.  College is my Wisconsin Badgers.  I am flying home and going to a game this year. So hopefully the atmosphere helps with the nerves.

OMG, it's so nice to hear that you'll go to the game. I presume it'll be amazing and the atmosphere will contribute too!

Enjoy it a lot @Marjorie

I just want to say thank you for all participants in my thread, thanks for sharing a bit more for you and your thoughts, I appreciated all of it.

@Patrícia Fortunato Montenegro  For me its Cricket. I just love the game. I love MS Dhoni, one of the best captains of Indian cricket team. He is one of the most successful captains.

It's nice to hear from you! I didn't know MS Dhoni until this time!

I went through Youtube and watched some moments of Dhoni playing. OMG, I believe his games are very enthusiastic; he's good and so straightforward on his movements; hahaha, fantastic! Thanks for sharing because this is so cool in the Community; we can learn about different things and cultures.

As a Brit, raised on the legends of Stirling Moss, Graham Hill and Jackie Stewart, watching Damon Hill and Nigel Mansell, then witnessing the rise of Hamilton (plus the awesome Jenson Button one off)... I have a great fondness for F1.

Sadly though, the Dutch TV sender changes almost every year and it's hard to keep up every since BBC lots most of the rights.

But I did NOT miss last season's grand finale. It was quite emotional... I'm always rooting for Hamilton but living in Holland and seeing such a great talent in the form of Verstappen take his first world title was just insane.

Although, truth be told... Masi fk'd up big time. I can see why Toto Wolff had a monstrous melt down.

But I don't watch sport too religiously... I was always a doer not a watcher. I remember at school being inexplicable pulled off the field and sub'd and I fk'd off to the changing rooms. LOLz

I do enjoy the 6 Nations tournament though every spring. Try to watch as much of that as humanly possible 🏉🏟🏆and any maybe Rugby/Tennis tournament in general.

Would be nice to go down to Rome and watch Italy vs England next year... the late March weather is really sunny and such a stark contrast to north europes dull grey tones!

I can't imagine living in Holland and all the insane reactions to Max's victory surrounding us. I'm 100% with you that Masi ruined up that big time. But it's nice to know that you have a fondness for F1. I'm a fan of Tennis tournaments too; I inherited it from my parents, and they don't lose any game, especially from Nadal. LOL! I'm cheering you to go to Rome next year and enjoy more sunny days! Thanks for coming here! 🤩🤗🌞😃

Muito obrigado amiga! I will defo send some pics if I make it...

Imagina, por nada! And yes, I'd love to see the pics if you make it! 😃

I love football and F1 and I have often been angry about some decision. The decision that made me the most angry was not to give the penalty on Ronaldo (the real one)

For me it's Hockey.
Although years ago I lost interest in the NHL due to the greed involved in professional sports.  I enjoy watching the juniors, the hungry kids trying to claw their way into the pros.

When I was younger I was all about basketball and football. Nowadays I really enjoy gymnastics, swimming, diving etc! The good thing about gymnastics (e.g. javelin) is that you are always on the edge and you don't know what is going to happen, or who is going to win, or who will make a good shot etc. It's amazing!

I just wanted to mention that the Canadian Junior Hockey Team just won the gold in over time against Finland.

I am enthusiastic about the FIFA World Cup this year.

Hockey is starting again.  Once I'm out of the hospital I'll go to all my grandsons games.