how to copy subtask from one story to another story Hi There, I am setting up a project in JIRA, this project has issues types story and subtask.

In the project the story are unique but the subtasks under stories might be the same across many stories.

I do not want to clone the subtask and then move it. It would be great if we can copy it directly.

Today, there are lots of other apps/options that you can use to properly copy the sub-tasks from another issue or properly create a template of sub-tasks that can be easily added when creating a new issue.

In Jira Cloud, you can use Jira automation under Project settings > Automation to properly create a determined set of sub-tasks with specific fields when an action is triggered. In the example below, the sub-tasks are created when a label is added to the parent issue: 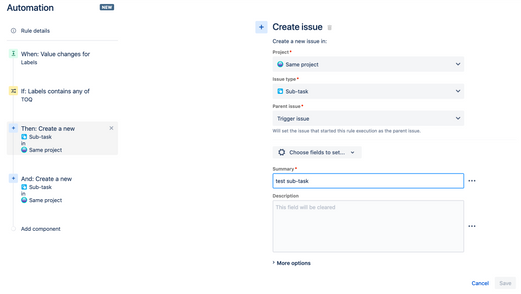 In Jira Server, we have the same functionality provided above in Jira Cloud, however, you must install the app Automation for Jira Server, which has a free and a paid version. Also, you can find more apps to achieve this goal in our Atlassian Marketplace, as mentioned by @miikhy before.

There's a plugin called Exocet which is done for that precise purpose: copying items and linking them eventually. It allows you to create actions (buttons) in subtasks which will trigger the action. I'm pretty sure it would work well in your case if you want to try it out!

A great alternative would be to have an issue (Story + subtasks) template and copying the story would give you all the subtasks as well, instead of creating new Stories you could just clone that template and reuse it, seems a bit unfriendly but should work as well.

Scripting is also an option, I know Power Script allows you to create buttons in Jira issues which can trigger script execution, a script could be associated with that button to generate the subtasks with default values or simply copying current subtasks to another parent.

Let me know if any of those solutions seems OK for you!

Oh this plugin costs me 75 bucks per month ((( Are there free once?