I am starting using xray in my company and I have a question, but first I want to give some context about how we use xray in our teams:

Right now , I am having this situation:

What should I do to execute again only the failed test cases without losing history and also to have visibility that the user story failed in 1st execution and is now successful in the 2nd execution?

Hi @Inês Figueiredo Costa and welcome to the community,

in general from my personal point of view(also as a former test manager) I would always suggest to create a new test execution for retests (as this execution will document that this execution refers to a new build/"version"/patch than the execution that failed) to have a clean reporting and transparency.

So I see 2 solutions here to realize that regarding your current setting --> both ways will also give you possibility to have a clean data in traceability matrix and you would have (as you mentioned) clear history when/in which test execution the test failed/passed:

This would take a bit more effort and would be easier to do if you create a test set per story and add all test cases of a certain story to that test set. By doing so you could then in the test plan issue filter your "overall execution status" for status "failed" and the test set for your story you want to test. You can then create a test execution for only the tests that will be shown in the filtered list (which should only show tests that failed in a special story) --> see screenshots 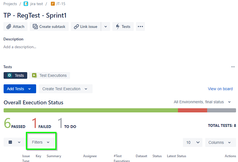 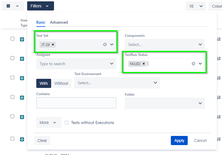 I hope I could understand your requirements correctly and give some helpful input.

Please let me know in case there are more questions.

Looking forward to your answer.

Thanks for your reply. I will use the 2nd option to have better visibility of all the history.

Thanks for you help :)

you are welcome. The 2nd option would also be my favorite one :)

If this was helpful may I ask you to accept the answer so this question is marked resolved then?

Wish you all the best on your further way with Jira and Xray.