Automation: Create a version in another project

You can sort of do this.

The issue is automation rules mainly run based on issue triggers - or, against issue actions. Rules which are project release-based aren't the norm.

So I created this rule:

I could not locate a way to base the Trigger on a specific project - so the unique identifier lets the rule know which versions trigger the rule, and which do not.

There also doesn't appear to be an option to set Version Start Date on the action - just name and release date.

Furthermore, I found this only worked as a global rule. I assume this is because if you place it in the trigger project's rules, it can't create in the target project - likewise if it's in the target project, the rule is only checking it for version creation, not all others.

It's a workaround but it is an option - if you can ensure these versions have a unique identifier not used elsewhere on your instance.

Thanks for your detailed explanation!

Create rule at the Global level. This will confirm only the desired projects will trigger the rule. Works great. 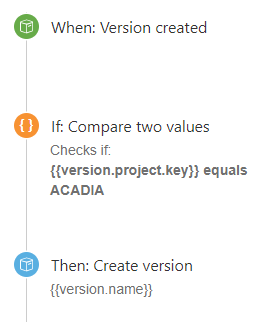 Hi Anthony, i can't make it. You can helpme?