I have a question regarding some JIRA functionality and is hoping you could help me.

Does it work for field Watchers per issuetype? I have created different workflow per issuetype, what property to each status of the workflow to be added to make it work, something may like There are a few different techniques to control who can edit fields. A common one is to not have any fields in the "Edit Screen" for an issue, and instead use a transition that pops up a transition screen to edit the issue. You can then control access to the transition more granular then you can general edit rights. (There are other methods as well, using scriptrunner or Power scripts, for example)

However, watchers are a different beast.

There is specifically a "Manage Watchers" permission in the permission scheme,

While you can't have different permissions per issue type in the project, you can get creative,

You can assign the Manage Watchers permission to a group (or user) custom field value. ie, have a custom called called. "Allowed To Manage Watchers." You can then control who is allowed to edit the contents of that field. If a user/group gets added to that field, they are then allowed to manage the watchers.

Finally in your workflow in the create transition, you can populate that field.

Its not the most straightforward solution, but it would work.

Hi Andrew, Thank you very much for your help.

Can you please check and let me know how to populate that field?

I'm not a scriptrunner user so I wouldn't be able to help you with that.

(You may need to hit "show more" in the grant permission window to see it. 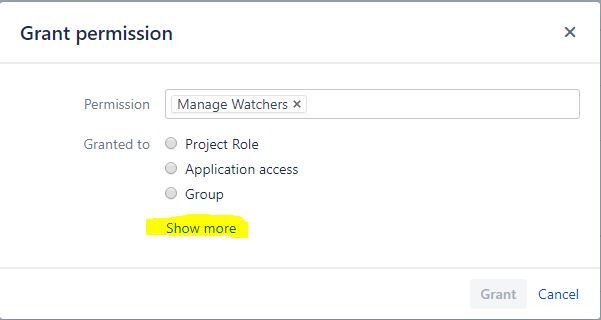 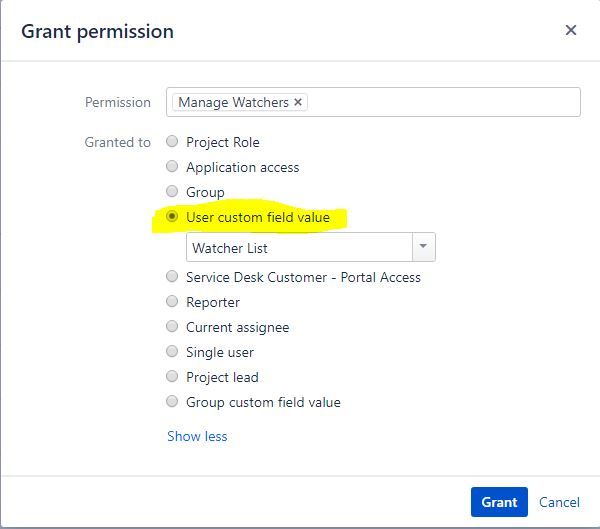 Hi Andrew, Thanks a lot, it works! Jenny