What is best approach to have users in Jira who have different access across Jira projects? Edited I have 3 Jira projects setup. I need to make 2 of the projects inaccessible for some users though. (only some of the team should have access)

Can you let me know how best to achieve this please? I had a look at permission schemes, and how to edit user configurations, but wasn't sure which was the best option.

I got the answer here.... You use a combination of Permission schemes, Groups and Roles.  https://confluence.atlassian.com/cloudkb/how-to-restrict-project-access-for-teams-in-jira-cloud-953142266.html

If you want 2 projects to be inaccessible for users, just simply don't put them in the project. This means that if you go to the project > Project settings > Users and roles, you don't include them.

But then also take user groups into consideration. Make sure that under System > User management > Users/Groups the user isn't included into a user group which would grant some sort of access across different projects.

If you want some users to have access to those 2 projects, simply add them project > Project settings > Users and roles into a role.

You don't have to edit Permission Schemes to grant access to users to projects. A permission scheme defines, for example what a certain user, who has Developer role in a Project can and cannot do in the project in theory. But if I understand it correctly, you simply want to add users to certain roles which can be done under Users and roles.

Thanks for reply. When I go to Project settings, I don't have Users and Roles - see screen shot. I only have Permissions (which shows the permissions across the scheme which as you said I don't need), or people (which seems to be some other way to add people. This page says I don't have anyone on the project - see screen shot, even though I did share it with 2 people and I have the ability to assign tasks to them etc. So I don't know why I would need to add people here in this option). 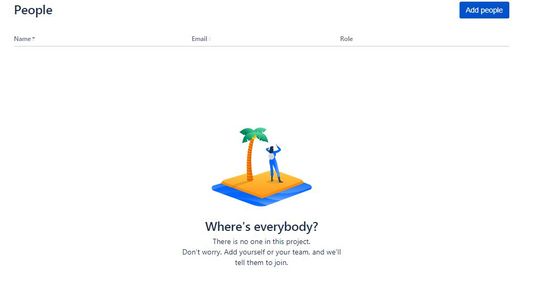 Maybe do I need to navigate to a different screen to get the users and roles options please?

Oh, sorry, I can see that this is Cloud, I was talking about Server.

Theoretically you should click on the Add please button in the top right corner. But I cannot really help further, if it's Cloud.

You can use the permission scheme to allow only some user (that you will put in different project role) to create edit etc issues.

You can take a look at this page :

Thanks for reply. Can you be specific in the permissions to only allow a user to be able to view 1 project though? and not even have access at all to the other projects.

That link details the types of actions you can set within a permission scheme on a project. But I'm still not sure on the setting different overall access permissions ACROSS different projects. Thanks, Kaye