What are the criteria for epics to show up in the epic panel in the scrum board? Edited

I have the simplest of queries for my board - "project = myCode ORDER BY Rank ASC", yet a particular epic is not showing up in the epics panel.

So far I've only tracked down a single one like that.

Is there some additional filtering behind the scenes that is making that one invisible? I can see it in the list of issues in the filter query, it's just not showing up in the epics panel. It's not in the DONE status.

I created a kanban board with a similar result - this item is not in epics panel, but when I switch off epic panel in the kanban board it does show up in the list.

Ah, the links on the right have led me to the solution which neither google or the initial typing showed - check your epic status field value. In my case that was set to DONE when the status field was "in progress"

There's only one reason I can think of, and that's that the Epic was marked done (not via the ticket status, but in the Epic panel. The ticket may still show a status of Open (or something else), while the Epic Status is Done.

For example, this epic is in the Open status:

But if I click the colored arrow on it in the epic panel, there's a choice to Mark as Done. 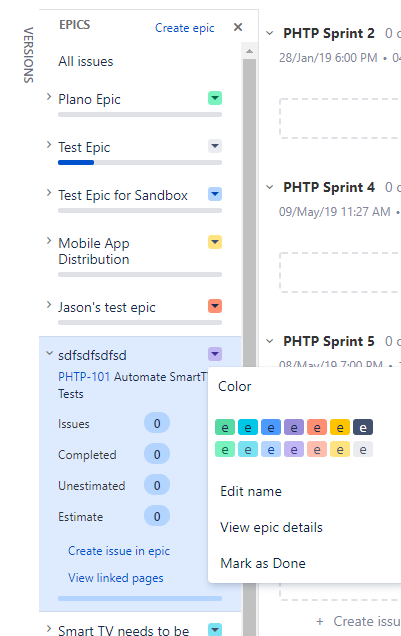 This sets the Epic Status field, which is unrelated to the ticket's Status. Epic Status is hidden by default; if you want it to display on tickets you can add it to your screens (if you're a Jira admin). Even if hidden, it's still available to use in filter columns and in JQL searches:

You should be able to reset it pretty easily by either adding the field to your screen, or, if you don't have access to do that, by bulk update. Create a search that will return the specific ticket number, then use the bulk update feature on the single ticket to update the field. (You'll use the Edit option in bulk update, not Transition, because you're not actually updating the ticket's status, but rather just editing a field.)