I have some issues with the solution field. I set up the option in my workflow ( I got my advice from here: https://confluence.atlassian.com/cloudkb/best-practices-on-using-the-resolution-field-968660796.html ).

What I have to do, that the solution field ONLY appears if I set a issue/ticket directly to done AFTER I just reagulary created the ticket/issue?
It makes no sense to set any resolution to a fresh/new ticket/issue.

Thank you for your help and advice.

Jira doesn't have "masks" and "layouts" refers to how cards are structured on boards, not issue views.

You also talk about a "solution" field, while referring to documentation on "resolution", so I am stuck there too.

So, some clarification and additional questions to help me understand:

@Nic Brough _Adaptavist_  Hi Nic! I'm really sorry. My company is using Jira in german language and the names of the views and functions is not fluant.

1. I'm talking about the Resolution Field.

2. All important projects are company managed.

3. One time its the resolution field and the other is the status (see screenshot 1) 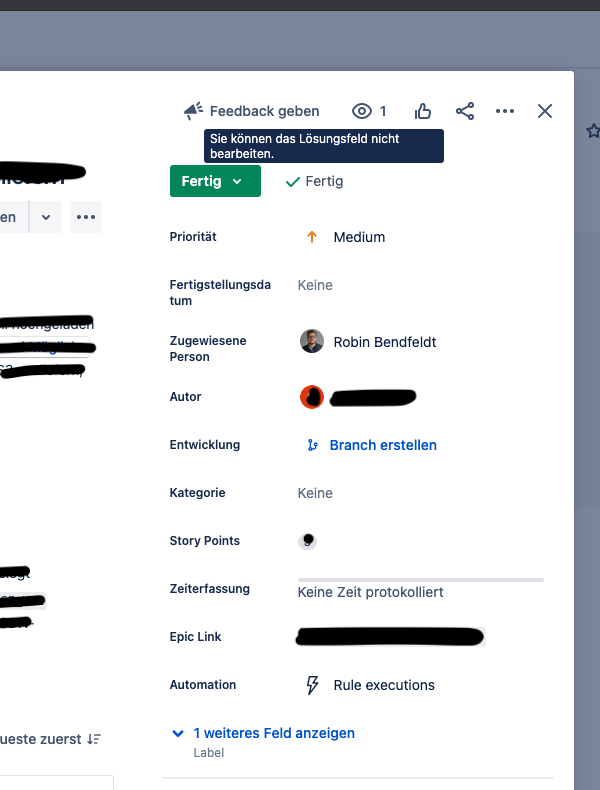 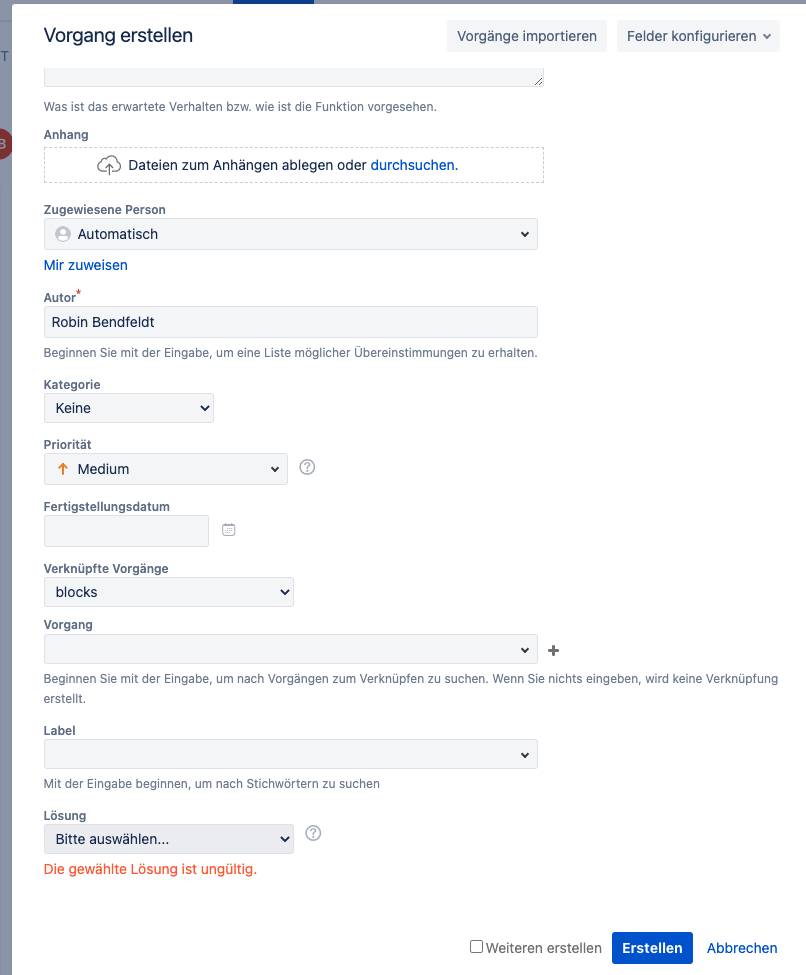 If I mark an issue directly as done I can choose a resolution out of the field. 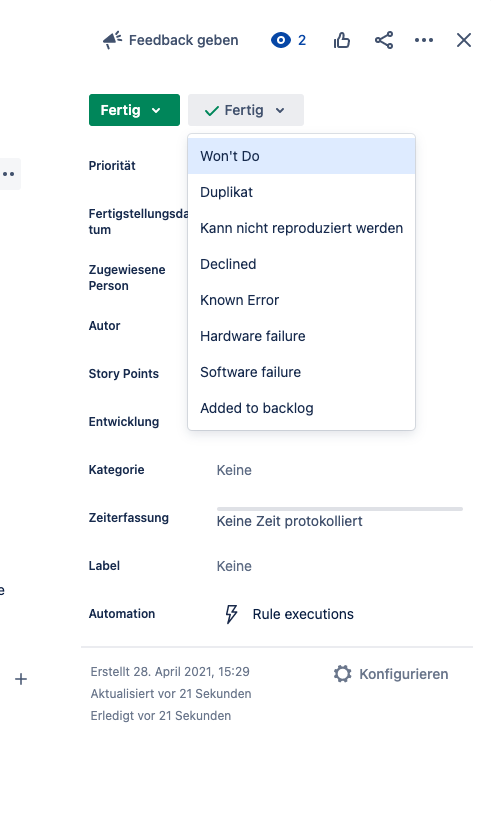 I hope this screenshots and informations help you to understand my problem and maybe you have a (re-)solution for me.

Ah, translation is always "fun", especially when we're in a field that has its own jargon.  Your answers and screenshots are perfect, solve all the translation problems I was having.

Resolution is a "fun" field, but to start off simply - Status is an indicator of where an issue in its process flow.

Jira mostly uses resolution to think "this issue is done with", it only really uses status when you're working in Scrum or Kanban, where the status are mapped into columns, and "the last, rightmost, column on a board is 'done'"

Note that resolution and status have no direct technical relationship with each other.  For the sake of human understanding, they should work together in an obvious way, but technically, they are independent.  Administrators have to remember to tie them together, mostly by configuring the workflows!

Resolution is "fun" because it sounds simple, but, but, but...  The basic idea is "Resolution <empty> = issue needs attention" (and by empty, I really do mean a null in a field in a database table), and "Resolution has any content = issue is done"

We strongly encourage people to use resolution to say broadly why an issue is done - words like fixed, duplicate, withdrawn, not-approved, done, complete - all broadly good words to say why it's been done.  You should never never set a resolution that suggests an issue is not ended, like incomplete, needs more work, not-done, blocked, unfinished, etc.  The worst one is when people add a resolution called "unresolved" - because there is a value in the field, the issue is resolved, but the value is lying and telling you it's not.

So, I think what you've done is not quite got the resolution in the right place on the screens involved.  A "screen" in Jira is "a list of fields to put in front of a human when a certain action needs to ask them questions"

.  For a company-managed project, there are four places screens are used - Create issue, Edit Issue, View Issue and Transition issue (you could be using many different screens there)

The trick with resolution is to understand that if the resolution is on an editable screen (create, edit or transition), then it will be defaulted to a value and hence set when the human says "save changes".

I think that's what you've run into - it sounds like you've added "resolution" to a single screen, but it is the only screen you are using for create and edit.  This means that you end up with resolved issues when you create or edit a screen.

So, the short version - remove the resolution from your create/edit (and view screen, it does nothing there).  You only want to put the resolution field on transition screens used by transitions from not-done status to done status.  (Or automate it with a post-function)

@Nic Brough _Adaptavist_ In the manual ( https://confluence.atlassian.com/cloudkb/best-practices-on-using-the-resolution-field-968660796.html ) there was no step to "code" something for the resolution field. Did I miss something?

In the following I have again some screenshots. This are the screens where I change the fields of the issues. If I change some there it will appear on all screens (= creat/edit)

On this screen I choose which typ of issue I want so change, but the changes are shown on the creat and edit screens.

In this screen I change the appearance of an issue just for a single project. 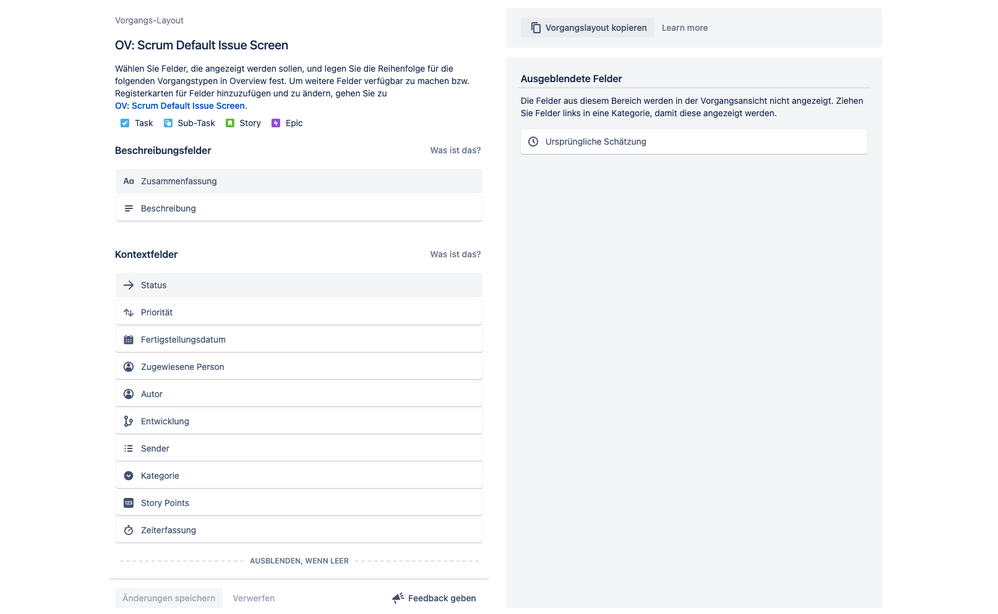 If I need more or other fields for the screen in screenshot 2 I have to go to this screen to add fields. 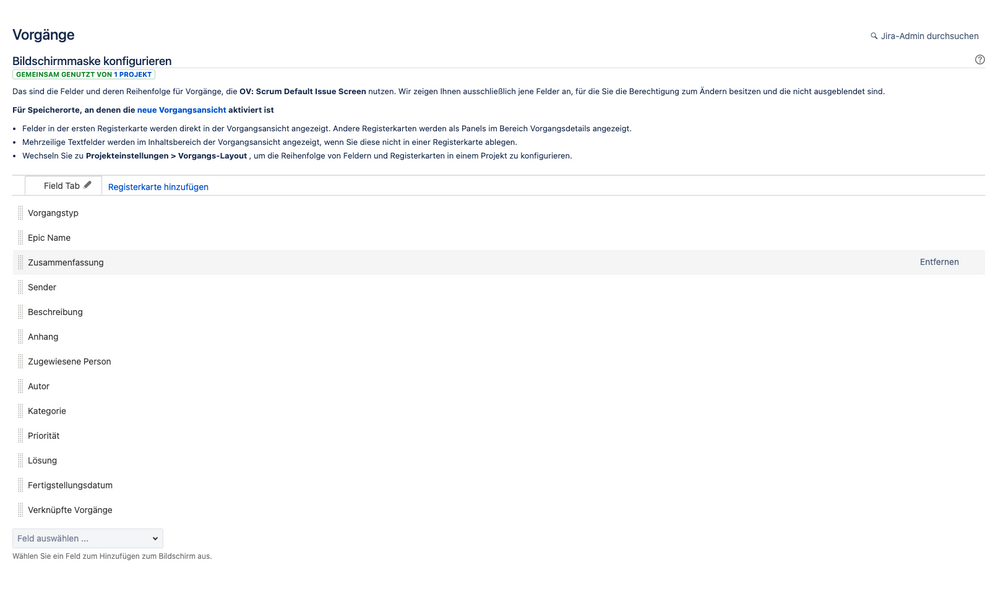 Can you tell me where I can change/add fields for just the creat or the edit screen?
If the resolution field only appears on screens that are edited everything would be working like I'm looking for.

Thanks for your support!

Screen scheme Y then tells the project which screens to use for create, edit and view, and I think you'll find that is currently set to the same screen for all three.

You could change that, but it is not actually a problem.  You must make sure the resolution is not on the chosen screen for create and edit (you can ignore the view screen, Jira ignores it for system fields anyway)

You only want to put the resolution field on transition screens used by transitions from not-done status to done status.  (Or automate it with a post-function - there's a standard "update field" one built into Jira that can set and clear the resolution)

@Nic Brough _Adaptavist_ Maybe you have some option or menu names for me where I can set this settings? Or maybe you have a screenshot for me?
Would be a huge help for me to find the right board for the settings which I have to made to fix my problem.

Thank you for your great support and your time!