Hello, I made my own workflow in JIRA server 8.5.4, but sub tasks don't automatically move when subtasks are closed. I want to create this pop up window "Update Parent Issue"in my projects and boards. Can some 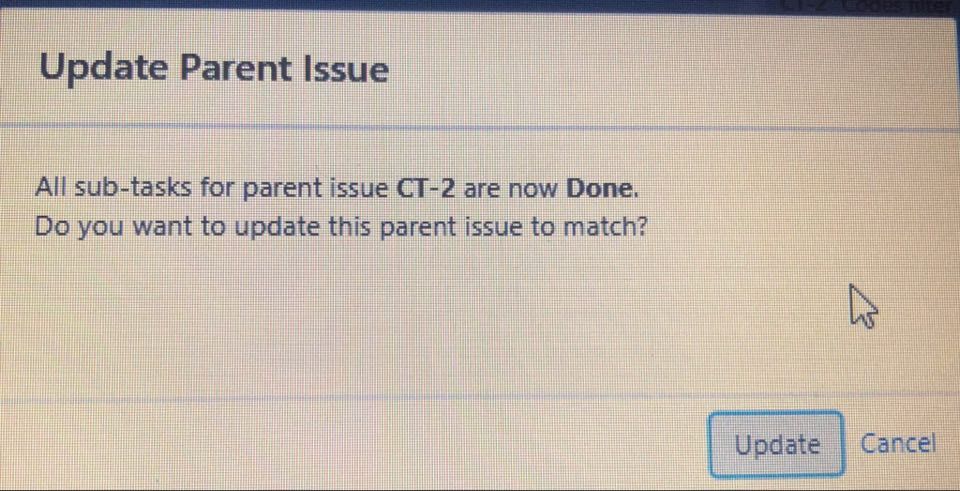 Pop-up windows are a little tricky. There isnt a good way to have a pop window after an transitions as been run. The closest option is a "transition screen" that can show up when a person tries to run the transition. You just need a custom field to hold the users response.

Create a new custom field called "Update Parent Ticket" You can use radio buttons with yest and no as options, or use a checkbox. The difference will be in how you check the value later.

Create a screen that only has this field on it. This is your transition screen.

On the close transition of your subtask add this screen to the transition.

Add a post function in your close transition to transition the parent if the "update parent ticket" is set. (there are a few different plugins that will allow you to do this. Depends on what you have available. (JSU, Update on Transition. for example)

(as an alternative, you can use automation for jira to set an automation based on issue closed, and type = subtask and the update field is set)

This will basically get you what you want. When the user clicks close on the subtask, the window will pop up and give them the option to set that field. And then the action will take place based on its value.