I need to have two boards , one for development and other for testing team ,objective of creating two boards is to make use of reporting like burdown , velocity reports of how much was developed by dev team and tested separately for testing team , I had created two boards separately  and right most column in first board appearing in first column of the second board for the testing team  but the problem is when the stories are moved in the second board ,the first board stories no more exist in the right most column , it disappears and also I am not able to make use of any reporting related to development stories since no stories exist in the first board  once the second board stories are moved further.

Yes, that's a setup I recommend when you've got split teams.  On the most simple level, yes, the two boards are set up correctly, but there's one thing missing.

Let's imagine the workflow is really simple and says:

And the Test team board as

This will work fine for your testers.  But your developers reporting will break in some cases, most noticably when it happens during a sprint!  If a tester picks up an issue that is in dev-done and moves it to test, which drops it out of the developer board completely, and hence out of the velocity report.

So, the fix here is simple - leave the test board as it is, but change the developer board so that the columns are:

Issues will stay in the last column now, and hence the reporting will remain accurate! 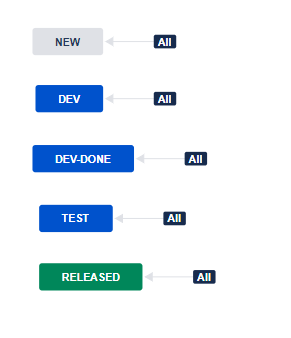 I tried it multiple times and it is not consistent to be placed in the first column of the second board.

If you pick up the issue/card on the board and hover it over the last column, you will see three regions appear, one for each status in the column.  Are you dropping the cards into the right one?

Um, sorry, that's not what I asked about.  What do you see when you hover cards over the last column on the dev board?  Do you see the column is split into three regions?  Which one are you dropping the card into?

Nic, Oh , I did not realize that feature ,until you told me the second time , working as expected , your quick replies really helped , thanks once again.