After upgrade to Jira 8, Epic Link disappeared from the cards in my Kanban boards. I can add it back in the "Card layout" section when configuring the board as one of 3 fields (btw, that means I have to throw out another field now??), but it just gets displayed as a plain text. I want it displayed as the coloured label as it used to (and as it still does in other views).

It sounds like you have the "Hide Epic Labels" option enabled on the board. Can you check in the Board Dropdown in the upper right to see if there is an option to "Show Epic Label" like this: 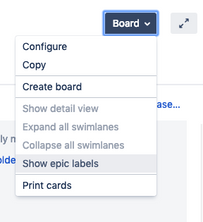 If this is the case select show and you should be all set,

Also I found a New bug testing this out where If you have the Kanban Backlog view enabled you will need to switch to the Kanban Board View for this option to show up in the dropdown, as it is not present in the Backlog view, Details on the BUG here:

No, that option is enabled. Actually, toggling the option doesn't do anything - Epic Links are not shown either way. It worked perfectly fine before upgrading to Jira 8.

thanks for the confirmation, and a couple things come to mind to check next, First what version of jira did you upgrade from, as there may be a Bug in an upgrade task for the specific upgrade path you used, I can run a quick check and see if its reproducible with the same upgrade path.

Next, there could be an add-on or local configuration causing a conflict try running in add-on safe mode as covered in "Disabling and enabling apps" to see if the behavior is reproducible with the add-on apps disabled and this would indicating its being caused by a third party app if the behavior stops.  Next Run through the tests in this guide to rule out any local configuration conflicts.

The only unusual thing I can recall from the upgrade, is that when Jira was starting up for the first time, it apparently ran out of memory and displayed a message saying that "it crashed, and then successfully recovered itself".

Everything aside from missing epic links seems to be functioning properly. There are no errors in dev console when viewing the board. I was pretty sure it was just part of the re-design to remove the coloured epic label...

I did a test run upgrading from a 7.12.3 to 8.0.0 and the epic labels are showing up without issue, so it's not the upgrade path, and since safe mode did not make a difference then it's most likely something failing during the upgrade

But as you noted hitting an Out of memory exception (OOME) during the initial upgrade, this really confirms that something was missed most likely an upgrade task.

Best case scenario is to do a roll back sooner rather than later, to the last known good backup before the error occurred, and give the system more memory   then redo the upgrade, as trying to back track errors during an OOME can send you down a rabbit hole trying to figure out the failure point as errors more than likely failed to log while the system was overloaded and even if you do find and correct any errors you are still never really sure if you caught them all or not and it could lead you into more issues down the road.

If you want to dig into this without a roll back as covered in "Upgrade task troubleshooting" , you will want to review the logging to narrow down the cause, so the the approach here would be to step through the logging during the upgrade and start looking into any errors noted while the upgrade was occuring, and then also during the following restart.  Look up the error apply any fixes you can find restart and continue to watch the startup logs for additional errors till it looks stable. But as the system hit a Memory error and restarted during the upgrade there may be some or all of the errors missing.

Also, this guide: "Installation and Upgrade Troubleshooting" contains a list of other articles with various fixes for known issues, that may contain some help on noted errors, and you could also try migrating the data to a staging system with an XML backup to see if any failed upgrade tasks can be triggered by a system restore to a fresh Jira install.

Any fix for this? I have the same issue. Toggling the hide /show epic link option does nothing.