Yes, you've got it right - moving a card from column to column is allowed or blocked by the workflow.  A card move on a board is performing a workflow transition.

To get the original question out of the way - nope, it doesn't matter if a workflow is simplified or not.  (In fact, simplified workflows are just workflows that Jira writes for you, based on the columns on the board)

So, yes, "if my workflow allows the transition between two statuses I should be able to drag and drop the issue between those two statuses on the scrum board" - that is almost right, it's not "statuses", it's columns.

A column can contain many status.  Moving an issue from one column to another requires that there be a transition from the current status to one of the status in the column.  Also, that the transition doesn't have conditions that block it from the current user.

But, annoyingly, you can't move between status that are in the same column.

Is it possible that your status are in the same column?

Also, can you check the issue view for the issue you are trying to get into a different column - does it offer you the transition behind the column move?

Hey @Scott Manna  - Did you ever get this working?

A software simplified workflow is an ideal workflow which allows users to freely move issues from one status to another. The logic behind is that all status have 'all transitions', something like: 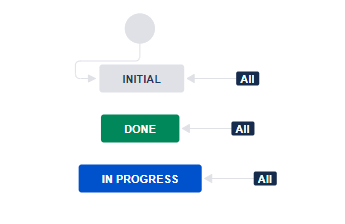 FYI, there are other features and benefits of software simplified workflow, which you may refer here: Benefits of using the Simplified Workflow

Thank you for the reply Utkarsh.  I did not want users to be able to transition to any status so that is why I moved away from the simplified workflow.  It sounds like you are saying if my workflow allows the transition between two statuses I should be able to drag and drop the issue between those two statuses on the scrum board.  Right now I cannot do that.   For example: I have a "Ready for QA" status and an "In QA" status.  In my workflow this is a valid transition but I cannot drag and drop a story from the "Ready for QA" column to the "In QA" column.  Should I be able to do that?  If so, is the old workflow that I was using cached somewhere which is not allowing this?

Did you check board column & status mapping after editing the project workflow?

configure columns - Make sure the correct status are in the correct column and there are no warning icons visible.

Can you manually transition the issue from "Ready for QA" status to "In QA" status?