unable to change the work flow from closed to reopen

Your "Reopen" isn't going anywhere, you need to add a transition from "Reopen" to lets say "Development in Progress" and it should work.

my required flow is

Reopen to development in progress

Reopen to Ready for UAT

when connecting Closed to Reopen- unable to create a transition from closed to reopen. this is my query. getting this issue. 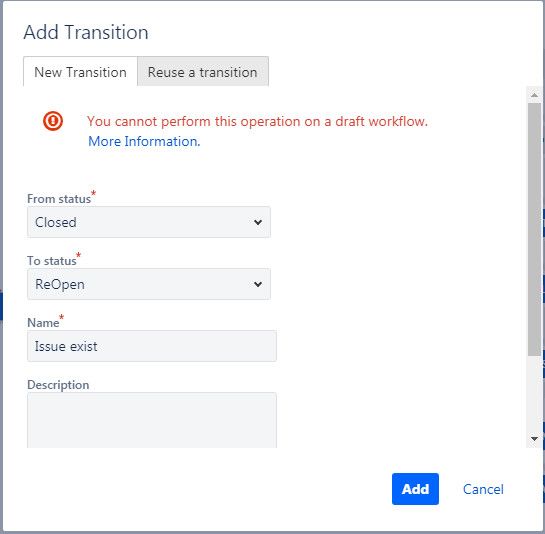 The Reopen status doesn't have any incoming or outgoing transitions (the grey arrow lines).

You can read about creating transitions here: https://confluence.atlassian.com/adminjiracloud/working-with-workflows-776636540.html

There is a known bug in Jira that is stopping you adding that transition.  See here: https://confluence.atlassian.com/jirakb/cannot-add-transitions-or-delete-steps-in-draft-workflows-203392961.html

You can work around it, by coping the workflow and adding your transition to the copy.  Then add the copy to the Workflow Scheme and delete the original workflow.  It's a pain, but as I said it's a bug...

There is a howling bug in the draft workflow editor functionality.  You cannot add transitions out of a step/status unless it already has at least one.

Atlassian are not going to fix it: