I would like hide two fields : Original Estimate (h) and Time Consumption (%) but he dont hide in my screen whereas in screen it's here , in field configiration the fields it's a good hide but it's not display in screen .

These two fields are not really independent fields like most of the others you see.  They are a part of the time-tracking field.

To hide them, you will need to hide the time-tracking field.

No, i would like appears the two fields in my scren when i create issue

Because in another project i see this fields.

You need to decide whether you want to use it or not, it's one or the other, you can't choose to partially use the time-tracking.

You can help me ?

Sorry, I rushed that last comment, and I should have explained more.

There is a field in Jira for working with estimated time and work logs.  It is internally a single field as far as we humans are concerned, but it presents itself as several fields sometimes.  They're all working with the same data, and they're all calculated and displayed from that data, but what you see (and get to edit/update) varies according to where you are and what you are doing.

The main point here is that all the estimated and actual times are handled by the field called "time tracking".

There are five main places you will use this field, although two of them are pretty much the same thing.

So, the shorter answer is that if you want to see the original estimate on the create screen, add "time tracking" to that screen.

Thank you for your help ;)

I have any problems , im add the issue types "Test-results" but i don't see this issue types, you have idea for resolve this problem ? 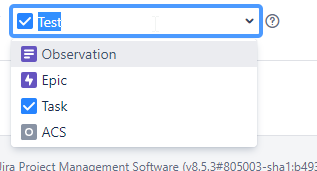 Have you added the type to the project's issue type scheme?