I have set up a Service Desk ticketing system for our finance team, It's still in the testing phases, so anything I do if I need to delete not an issue. But one of Finance's requirement is that they are able to add 2 approvers, now I can add ONE approver and that all works great but my issues comes when let's say the COO has to approve and then he needs to send to the CEO, there is nowhere where he can put the CEO's name. FInance doesn't want anyone to deal with this on the backend, it all needs to be easy and put in the front end side. Any ideas?

Now bearing in mind that it maybe be the CEO or CTO or another director. So I need this to be a free way or if I need to determine great but I need to let the COO chose.

Additional requirement:- I need that when the COO puts the person's name that an email gets sent as well like below:- 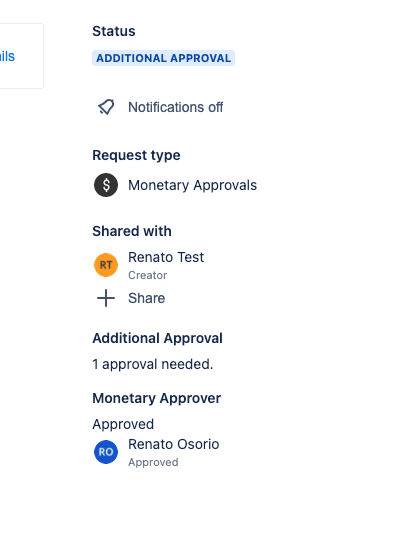 When using the Approvals feature, it's possible to add approvers for different statuses.

Customers can select an approver while creating a ticket, or a project administrator can add a default value for the field.

What I understand in your use case is that the COO is added as the first approver and, once the ticket is approved, it will be transitioned from "Waiting for approval" to "Additional approval" and the name of the CEO must be selected, is that correct?

Finance doesn't want anyone to deal with this on the backend, it all needs to be easy and put in the front end side. Any ideas?

The only way to edit the Approver's field is on the agent view because after the ticket is created, it's not possible to edit anything on the customer portal. So, if the COO has permission to access the customer portal only, once they approve the ticket, they won't be able to select the next approver. Only someone with a Jira Service Management license and a member of the role Administrators/Service Desk Team on the project will be able to select the CEO as the approver internally.

Once an agent/administrator selects an approver, a notification will be sent to them as well informing them that it's waiting for approval.

Otherwise, the best option would be to add the COO as an agent, so they can use the agent view to edit the issue after they approve.