We use Service management Cloud to handle tickets and use time to first response to measure our tickets.

I have created a Priority triage with JIRA automation to help set our priorities which the SLA are measured against. After creating this automation the SLA's are only landing on 4h, whatever the priority of the case.

We use Incidents and Servie Requests with JIRA.

The Priority triage is an automation which valdidates two custom fields and based on that sets the status.

When issue created > Check two fields > if they equal the two fields set status > if not check next combination.

This automation works and sets the priority we want on the ticket.

I then changed the SLA to start counting when "Entered status OPEN". However the tickets will still always have 4h time to resolution (even though the priority of the case was set to medium which should equal 16h).

Could anyone assist me in where it is going wrong and which JIRA is stopping on the first goal of our SLA's?

I solved this by splitting the SLA JQL rows per issuetype. So i would have 1 line with 4h issuetype = incident AND priority critical

And another line with 4h = issuetype "Service Request AND priority Critical

i would be interested in seeing the history of an issue being created thru the automation. BTW, what is the default status on issue created. 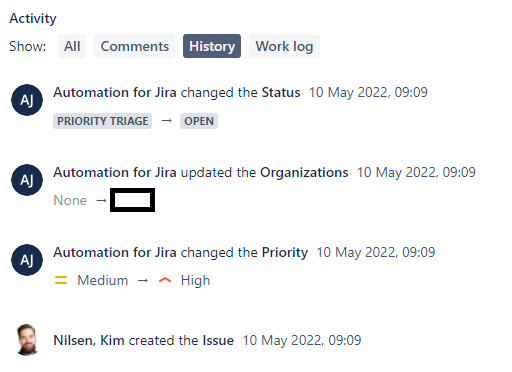 The default is set to Medium which should equal 16h according to the SLA's.