Emailing approver that has been added after ticket creation

I have a ticket in service desk that has been submitted without an approver. The service desk agent determines that an approval is needed and manually adds the approver. Is there a way to send an email to the newly added approver with the Approve button? So far I've only been able to have Service Desk send the email if the approver is added when the ticket is created.

It sounds like you have the Approvers field added to either the Edit or View Screen allowing it to be modified ad-hoc, and when an issue is edited it triggers a Update event to process the notifications, but the approver notification is sent when the issue is transitioned into an approval status, and cannot be triggered on the update event.

EXE, the following workflow would create the issue in the waiting for approval status, and notify any user added to approvers on the create issue screen or the default approver that was set, and then allow users to trigger the add approver transition to trigger the screen with only the approver field, and send a notification to the new approver on transition: 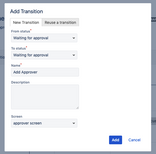 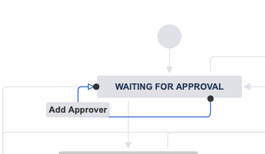 Another option If you are not initiating a transition to add the approver, you could get around this by creating a filter like the following to indicate the issues that a specific user currently needs to approve, then ask your approvers to subscribe to the filter based on their name, or you could create a dashboard filter for them to work out of for daily tasks:

Thanks @Earl McCutcheon I'll give that a try.