What an extraordinary world we’re all living in right now.

No-one could have predicted the working world to shift so dramatically to remote-first, or under such challenging circumstances, and we understand the need for flexibility and virtual connectedness now more than ever.

We’ve got a few new features in the works that will hopefully make your adjustment to remote teamwork a little easier. Read on to see what’s new in Jira Cloud Mobile.

Here's what has shipped in Jira Cloud mobile since our January update:

Teams use reports to track and analyze their work throughout a project, as well as after a project’s completion. Reports were already available on Jira Cloud for web, and now they’re on mobile. 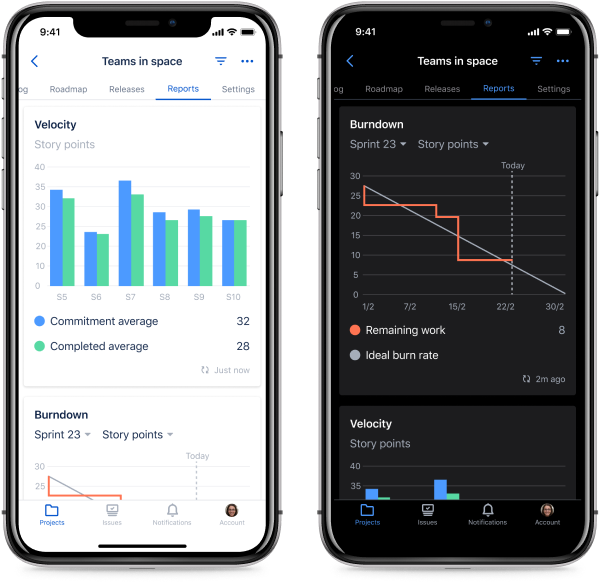 Soon, you’ll be able to get a visual overview your team’s latest stats in the palm of your hand.

Releasing a version of work is a big deal. It’s often the culmination of many months of hard work. Next-gen and classic Releases view is already available on Jira Cloud for web, and now they’re on mobile, too.

To get these features NOW, sign up to be a beta tester. These features will be generally available later to all users as part of the normal app version updates in the iOS and Android apps late April.

The most requested feature for mobile is finally coming later this year. Managers and team members use dashboards to understand what’s going on, and what to do next. Forget email updates – it’s all about tables and charts.

It’s early days for development, but you’ll be able to view your dashboards and see popular gadgets within the Jira app.

We are starting with the most-used dashboard gadgets to begin with, and more will come later on.

First time you’ve heard about this? Check out this blog post for dashboard & gadget top tips on Jira Cloud for web.

Want to see your integrations and marketplace apps?

We’re on it, and we’ve started with developer information and marketplace add-ons.

Later on, you’ll be able to see the status of your developer integrations within the issue, just like on web. For the first release we’ll only show the status with more improvements planned in the future.

Marketplace apps are also coming later this year. We’ll be starting off with bringing the views you see on the right side of the issue on web.

(We’re working with partners to make sure everything is tested and working before public release. Coming soon. Some apps like Tempo should be live now.)

As usual, sign up to be a beta tester to get early access as we make updates.

That’s it from us for now. We’ll see you in a few months for another update.

Stay connected with the Community by sharing your thoughts below.

I love this, BUT I am only seeing Velocity. How can I also view Burndown in the app? We have burndown charts turned on for the project.

Very timely improvements. Glad we are making the switch from Trello to Jira Cloud. We're starting with next-gen reports support for now. If you have next-gen burndown enabled, please download the latest version of the mobile app and you should be able to see it.

We need to get more charts and views available for management reporting like trend analysis of the story points, defects etc.

I would love agent notifications in next gen service desk