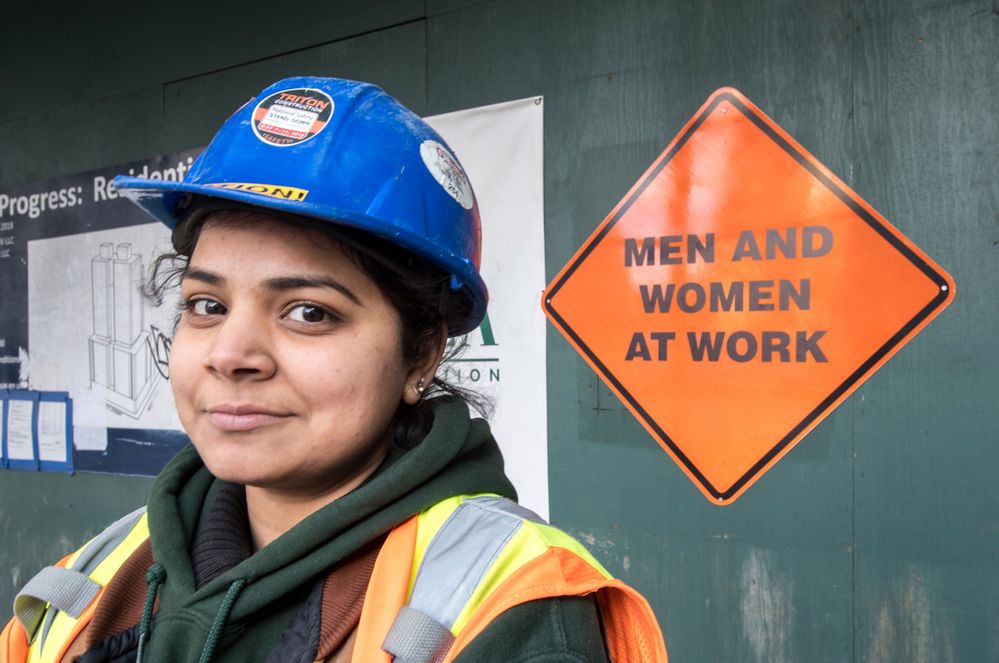 A construction company in Manhatten, New York recently replaced their “Men at Work” signs on their site. This was part of their initiative to create a gender-neutral workplace environment. Research shows that the construction industry is mainly occupied by men.

Check out the article here.

As a woman myself, I can say that working in the construction industry wasn't an option for me growing up. I do not recall seeing women in that role, reading books that depict that or seeing them on TV.

I pose these question to the group:

Sometimes topics like this make me feel like a grumpy old man yelling at kids to "get off my lawn". This is particularly distressing as I am only in my 30s!

When I was growing up I was taught man/men had multiple meanings. Sometimes it referred to mankind/human and other times it referred to a gender. I was encouraged to be generous with others - assuming when there was 2 meaning that they meant the one not intended to cause offence.

In the case of safety signs, brevity has a value. Do the positive impacts of doubling the word count on a sign outweigh the negatives?

It felt like we were being taught that gender was irrelevant to most of our choices in the 80s and 90s (peeing and childbirth aside). The current decade seems to be defining more things as belong to a specific gender while giving flexibility to a person's gender identity. It is a significant shift.

@Kat Warner _TechTime_, thank you for sharing! I laughed at your grumpy old man remark. I feel like that when I see my kid watching a video of another kid opening a present. (Totally irreverent to this)

Why not change the sign to say "People at Work"? That would solve your brevity concerns, would include people of non-binary gender, and would stop the practice of assuming women see themselves in the words man, guys, or mankind.

I see a real value in being gender-neutral that goes beyond any kind of radical feminism. Humankind works for me. I do not see my self in man (in the "generic" sense) or in mankind. I am a woman who fits into the binary gender identity of our past. I'm a heterosexual female. Still, there have been too many times when men assume I feel included when they use male terms to mean "all of you." And there have been times when I assumed when men used male terms to mean "men only" and I assumed they meant all of us--only to be told differently. I vote for clarity and inclusiveness.

Is it so hard to say firefighter, mail carrier, people, humankind, police officer, etc? Many of these terms also serve to clarify people's jobs. My ex-husband was confused as a child--he thought a "fireman" started fires, so he wanted to be one. The descriptor fire fighter is so much more clear and accurate.

@Karen O'Keefe, having a job where you start fires, I'd admit would be pretty cool. Thank you for sharing!

@Karen O'Keefe, please tell me your ex grew up to be a Ray Bradbury fan.

When I was a kid I told my grandfather (a long-time draftsman and engineer for the auto industry, he designed the casting for the big block 350 "Rocket") that I wanted to be an engineer when I grew up. It was a proud moment for him, so he warned me that I'd need to be really good at Math.

His moment was crushed when I asked "But Grandpa, why do I need math to drive a train?"

In seriousness, though, I am all for gender inclusion and try to use gender neutral pronouns when possible (i.e. "they" instead of "he") so I agree that "People at Work" and the others mentioned are better. Those are all-inclusive, and covers people that are not cis-gendered.

The concept of non-binary gender is strange to me, but it also doesn't pertain to me, so if that's what some people want, I can roll with it. (Which is a whole different topic.)

Scott, imagine how you would feel if you woke up tomorrow and had breasts and other female parts. And everyone referred to you as a woman or "she." That would be weird, right? No matter what people told you, you would know you are male. You might or might not elect to conform to other people's opinions to make it easy on them. Or, you might stand your ground and try to get back to your "normal."

No matter the state of your body parts, you would argue that you are a man. If I had been born with male body parts, I would still be a female. That's the feeling transgender people have.

As it happens, I know several transgender people: before, after, and during transition. It is a confusing thing for us binary gendered people to understand. Birth and development are complicated--and sometimes hormones applied differ from genitalia. Sometimes babies are born with both sets of genitalia--and surgeons choose the sex of the kid by removing the male organ (the easiest option).

I'm neither a doctor nor a scientist, but I believe all people are perfect at birth and we need to support others in their journey. I feel rather fortunate that my gender was relatively simple and I don't have to suffer the way transgender people do. They are harassed and attacked and discriminated against more than any other group. They need our compassion and support.

Oh, I'm not questioning that non-binary gender is a fact, and I agree 100% that they need allies in a cis-gendered world.

All I (a cis-gendered, heterosexual, Caucasian, middle-class, middle-aged, college educated male) am saying is that people are people no matter what labels get attached to their "peopleness,"  and any efforts made to be inclusive of that "peopleness" are good efforts....Even if a straight white guy could never fully understand it.

Scott, I meant to acknowledge your acceptance of people you don't understand. I was just trying to offer some insight (as much as I know, which is still not enough). You seem like a great guy.

Got some super cool stories about my daughter and I and our discussions on Gender. Will write them down when I have a coffee break later today 🤓🍶

So here are some of my favourite ones to date (my daughter is 4):

ChiChi: Daddy, why do you sometimes pee standing up?

Daddy: Because I can.

ChiChi: Can I stand peeing up?

ChiChi: But I don't have a willy!

Daddy: So? Why does that stop you?

ChiChi: (whilst playing with dresses) Pink is for me and Blue is for Dash (our 2 yr old Son)

Daddy: And may I dress in Pink?

Daddy: Because I am a man?

ChiChi: No silly! Because orange is your favourite colour... mine is Pink. Tomorrow my favourite will be purple and then I will not like Pink anymore.

She really is Karen! 😍