In my organisation we're creating a Release note page for every single app's release to present informations what has been fixed when based on info from JIRA (JIRA issues macro is used). Right now, after every release we manually clone previous release page and edit it to adopt for a new one. It would be perfect If I can create a template, so a user will need to define $version property only and then it would be used in JQL qury e.g. like that:

so it could be used by macro like that:

Unfortunatelly from what I can see in JIRA issues macro doc I can't just use JQL query as macro property.

I'm using Confluence for over a year, but I never treated it more than a documents aggregator and I would like to understand better what it is capable for.

So I managed to use $version in JQL query directly and defined JIRA issue macro like that:

but to do it I needed to start typing $version in a new line and after editor defined it as  variable I've wrapped it in {jira:project = ProjectName AND version = ('$version')} , but Confluence won't recognise it as a macro - to do it I need to manually remove "}" at the end of macro definition.

I have found several pages that seem related:

They give a nice solution, but it only works on Server, and I'm running Confluence / Jira Cloud.

Has anyone figured out a way to do this in Confluence Cloud?

Having the same issue, did you ever figure this out?

Same here, any solution for the cloud environment?

Today I have discovered Blueprints templates in Confluence and templates from JIRA section (Status Report Template and Dynamic JIRA Report Template) do exactly what I need! There is the option to edit them, but JIRA macros seem to be represented by variables, e.g. $jiraissuescountmacro variable here: 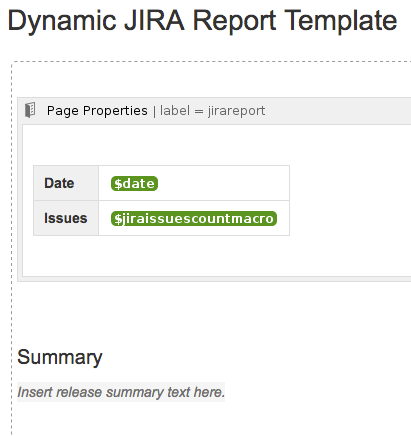 Is there any option to edit them? I'll play with Create a blueprint-style report guide - I have a feeling it's what I'm looking for